• DR Ajujo says patients are seeking for 'cocktail' of procedures which vary from one patient to another.

• Vera Sidika is among Kenyan celebrities who have always talked about undergoing plastic surgery. 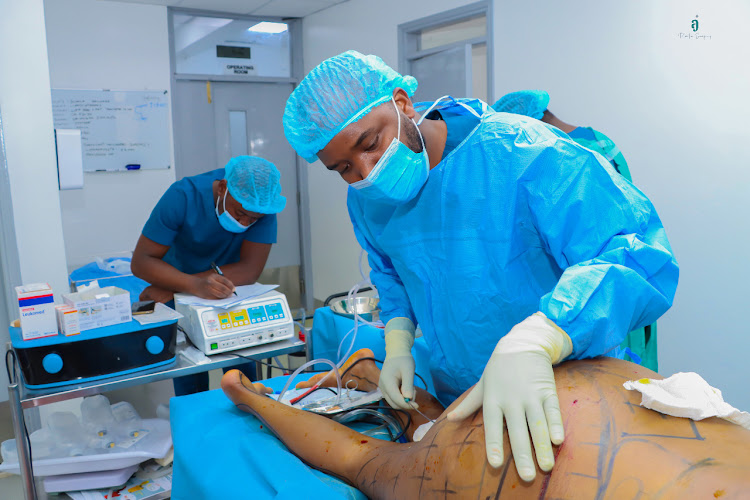 Of late, there has been a rise in demand for plastic surgery in Kenya with more people seeking surgical interventions to build on their physical appearance.

Social media has been cited as a major tool that has effectively created awareness and influenced people into embracing plastic surgery.

Speaking to Mpasho.co.ke, Dr. Martin Ajujo, a plastic, reconstructive, and aesthetic surgeon at AJ Plastic Surgery, who said that the field of aesthetic surgery is rapidly expanding with new procedures invented.

According to him, patients are seeking for 'cocktail' of procedures that vary from one patient to another.

"These procedures include facelift and fat grafting, skin tightening and liposuction or tummy tuck, breast augmentation, Brazilian butt lift, and mastopexy," he explains.

He says the most sought-after procedures in Kenya are breast augmentation and Brazilian butt lifts for women.

"In a society in which celebrity is treated as divine, information technology rules, and new ways of working predominate and people increasingly judge each other on first impressions, cosmetic enhancements of the body have become increasingly held up by the media as a norm," he says.

Socialite Vera Sidika is among Kenyan celebrities who have always talked about undergoing plastic surgery undergoing breast surgery a few years ago.

Gospel artiste Justina Syokau has been trending on social media after allegations that she spent sh3 million to undergo surgery to increase her behind.

"When compared to those who did not undergo cosmetic surgery, most participants who did noted increased self-confidence," says Dr. Ajujo.

Brazilian butt lift in particular is one of the most popular and in-demand procedures among women seeking a more appealing and attractive contour.

Looking good, youthful, and elegant is everyone's wish, especially women who are now more empowered and willing to achieve this at all costs.

In the modern world, most men seem to be biologically attracted to curvy women, a factor that has led to an increase in aesthetic surgery as women strive to become more attractive.

Men have also recorded an increased interest in plastic surgery.

Tummy tuck surgery has become more common among men who would like a tighter midsection. A tummy tuck will tighten loose abdominal muscles, as well as remove loose skin around the midsection.

This helps get rid of protruding abdomen, locally referred to as 'kitambi' which has been associated with poor sexual performance in addition to bad shape.

But unlike in the past when these procedures were being sought outside the country by a few who could afford it, we now have experienced and competent plastic surgeons in the country like Dr. Martin Ajujo who has done many such successful aesthetic surgeries at AJ Plastic Surgery.

"We have a multi-disciplinary team of anesthetists, cosmetic surgeons, theatre nurses, and nurses trained in post-operative care.

We also have an eight-bed capacity that hosts our patient post operation in order for close follow-up. They are housed in our facility at least for five days or until main complications are managed.

"We also keep a close communication with our patients after discharge, through phone calls and short duration clinic visits," says Dr. Ajujo.

According to him, procedures should always be performed with a good understanding between patient and doctor based on realistic expectations with an emphasis on safety.

Media personality Willis Raburu has given an update on his weight loss journey and it's impressive.
Entertainment
1 month ago

• Amira earlier on in the year had revealed she was on a quest to shed off weight as she highlighted she wanted to focus on herself and do better for ...
Entertainment
1 month ago

Willis Raburu spent 900k on a Gastric by-pass procedure.
Entertainment
1 month ago
WATCH: For the latest videos on entertainment stories

Justina Syokau confusing her fans with her new 'body'