He also advised against falling into peer pressure,just because one wants to fit in. 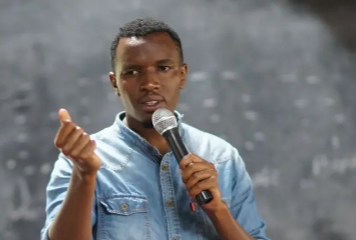 Motivational Speaker Sam West. He has advised teenagers to abstain from early sex during this school holiday.

With the school closed there will be indiscipline cases among teenagers thanks to their new found freedom.

In exclusive interview with Mpasho, Motivational speaker Sam West has shared tip on how teenagers can avoid early pregnancies and falling prey to sexual abuse.

They need to avoid friends who only brag about their girlfriend/boyfriend or their mubaba. This might give you the pressure to look for a boyfriend."

Sam further advised that a man cannot have a platonic relationship with a girl without wanting to take it further.

They should also forget that one can have a romantic relationship without sex.

"If you let a man to kiss, or touch you he will definitely end up taking you to bed. There are place where if touched sexual feeling will be aroused."

In conclusion he advised

"Also remember to speak up if you are being abused sexually so that you can get help."

Between January and February this year, Kenya recorded a total number of 45,700 early pregnancies among adolescent girls across the country.

Early teenage sexual activities have also led to an increase in new HIV infections among teens in the country.

In January and February this year, Kenya has recorded 98 new cases of HIV every week among girls aged 10 and 19 years.

On Monday a KCSE student died during child bearing.

Velma Anita Ochieng died on Monday morning in what her family claimed is negligence by health workers at the hospital.

Velma, 19, was a student at Nyajanja Mixed Secondary School in Kochia, Rangwe and was expected to sit her exams this week.

She was admitted to hospital on Saturday at 5 pm after showing signs of labour. She was expecting her first child.

Else where a KCPE candidate from Tharaka Nithi constituency has given birth hours after the National exams began.

The candidate welcomed her baby on Monday morning at the Marimanti Hospital before starting the Mathematics paper.

Area Education Director Salecio Maringe says the candidate will continue to write her exam from the hospital.

She's among 2,147 candidates sitting for KCPE in Tharaka North sub-county.

The candidate welcomed her baby on Monday morning at the Marimanti Hospital before starting the Mathematics paper.
News
1 month ago

Okwach called on all stakeholders to be vigilant and play their roles during the exams.
News
1 month ago

Grade 6 pupils will start with Mathematics and English papers on Monday.
News
1 month ago
WATCH: For the latest videos on entertainment stories