Has Samidoh quit his police job? he responds

• Samidoh has not found any reason to leave the force despite his growing success in the music industry.

• Samidoh is preparing for a tour in the US for two months. 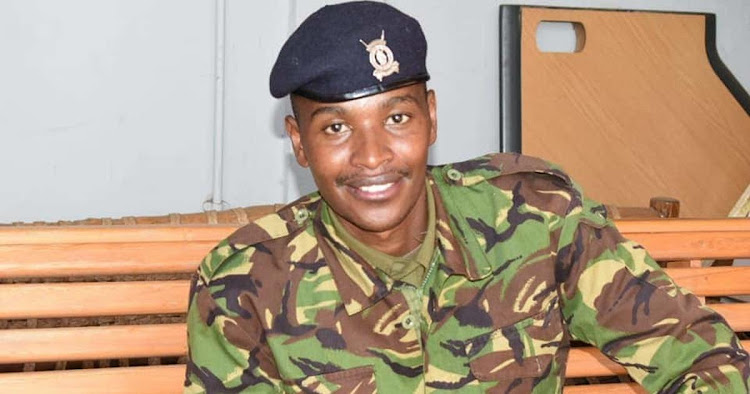 Mugiithi star Samidoh is taking care of many vulnerable children in his former secondary school in Laikipia county.

Samidoh, who works as an Administration Police officer, told Word Is that a huge chunk of his salary goes towards paying the school fees of those he sponsors.

He often shares photos and videos of him performing in various parts of the world but not of him serving as an officer.

Samidoh said he has not found any reason to leave the force despite his growing success in the music industry.

"I work during weekdays and when needed and during the weekends do my music, just like every other talent in the police service," he said.

The artist said he worked hard to get the job.

"Have you ever gone to a police recruitment exercise and seen people without shirts being taken through various activities?" he said.

"Leaving a job you searched for under those circumstances is very painful."

Samidoh said being partially raised by the community inspired him to go back to the school and touch lives.

He said the number of needy children he supports, keeps growing.

"I had moments during my secondary school years where I became a son of the community literally. It was painful being sent home for fees knowing very well there was no one to ask from," he explained.

"I wished there was someone who would come through for me. That is how the education program came to be."

Samidoh is preparing for a tour in the US for two months.

He said music was a talent he was passionate about and wanted to share with people, and by God’s favor, people liked his work.

He credited his mother, Wairimu for his success, saying she mentored him by singing along with him in church and crusades.

"I wish she was alive for her to see how her prayers molded me and kept me going," Samidoh said.

"My second US tour begins October 22. My first tour was great and well-received. We are going to the states that we missed out on in our previous one."

Samidoh wishes his mum was still alive to see the man he has become.
Exclusives
1 month ago

Mugiithi singer, Samidoh Muchoki was spotted on a vacation in Mombasa with his wife Edday and their three children.
Exclusives
2 months ago

Fans have described Samidoh's wife Edday as an epitome of an true African woman for sticking with her man regardless.
Entertainment
2 months ago
WATCH: For the latest videos on entertainment stories