The Tanzanian hitmaker has opened up about her career

• Saraphina is grateful to Kenyan fans for showing her love at the Carnivore.

• Saraphian joined Otile on stage at the Stanbic Yetu Festival on July 30th. 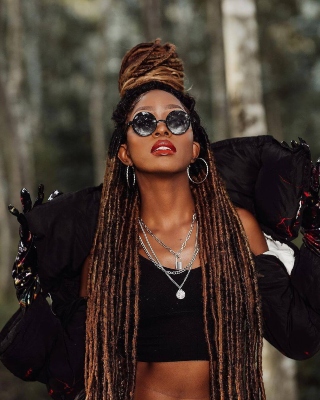 Saraphina is a fast-rising singer from Tanzania, famous for her hit song Nipo Nyonyo, Nipo Titi. The song has gone viral on Tiktok with Kenyan users doing the rendition of the song very well.

Saraphina jetted into Kenya before the just concluded Stanbic Yetu concert that went down at the Carnivore on Saturday, July 30.

US RnB star Anthony Hamilton performed, as did Otile Brown. Speaking to Mpasho's Kalondu Musyimi, Saraphina spoke about the song and whether she has a thing going on with Otile.

What does the song title mean?

"So it's a saying mostly in the streets and Swahili speaking people so they actually use it many times when you are like you know bonding and trying to make stories sipping whatever."

"Like we wanna make sure like are we together. Do you understand me, do you feel me? So upo nyonyo? Nipo titi. So like in the context of the song I wrote a love song you know, upo nyonyo is actually a love song. I was like I had an experience from heartbreak and now I found new love and a new person who actually loves me so much, spoils me, gives me attention and I'm just making sure that I'm letting everybody know I am here to stay. Nipo nyonyo nipo titi."

"Nimejaa tele, like I am not leaving today or tomorrow I am staying so that's like the meaning of the song."

Saraphina described her joy at shooting the video for the popular hit.

"We shot the video in South Africa actually, it was like the first time for me to go to SA as well, so I sat down with my team my manager, and said we've got to change the environment a little bit. and go to SA and try and make something different."

So the entire production team jetted off, "We shot like a couple of photos being part of that and we came back and you know, it was what it was and it is what it is."

Saraphina thanked fans for loving the song saying it is unexpected.

"Everyone just loves the video, the quality, the movement I didn't really know people could receive it with so much love and so much support."

How much did the singer spend to shoot the video in South Africa? "Actually I can't say in digits coz we went to shoot more than just one video as a whole but it wasn't like cheap."

Is it in the millions? Saraphina got cagey about the money involved saying, "Uhm it could be in Kenya millions."

For those who don't remember, Saraphina performed at The Stanbic Yetu concert at the  Carnivore. with her sterling performance and vocals blowing concertgoers away.

About performing during the show," So this is how it happened. Actually, I'm trying to you know bond with the people to know more about Saraphina, aside from just knowing nipo nyonyo. Like I am a vocalist for real. And I'm also a performer. I can dance and stuff like that. So when you like to go back to the shows that I've done you can actually see what I'm talking about. I've got dope stuff going on."

How did she land get the Kenyan concert?

"I was planning to come to Kenya before and then logistics messed it up and then we planned to come to Kenya like a few days ago and so I called Otile coz we talk and I told him, about it and he was very positive about it. "

Otile was supportive of the fact that she was coming to Kenya and that he brought up the concert and she jumped at the opportunity. "I am coming and I am going to perform on that stage."

Performing next to Otile and Anthony Hamilton was also a big factor in Saraphina going to the concert.

"He is performing right next to another big act in Kenya ..(sighing) I want that so it was an absolute honour and was really humbling to get that chance. I did the live performance, I did not expect the reaction that I got from the people coz he was also like you can just come and see how your Kenyan fans react to the song and I was like yeah I want that."

True to it, Kenyan fans sang along to the song, surprising her so much.

"I'm actually grateful and I'm actually happy to be here, to be able to bond directly with my Kenyan audience and I want to tell them nawalombotov sana."

Watch the video interview below;

Willy Paul has revealed he would never collabo with female artist Jovial on a song.
Entertainment
1 week ago

Things Beyonce has removed from her album after criticism

Bien Aime Sol recently revealed a lot of information in an interview with Mambo Mseto's Willy M Tuva.During the
Entertainment
1 week ago
WATCH: For the latest videos on entertainment stories