Piece by: KNA by Brian Ondeng’ 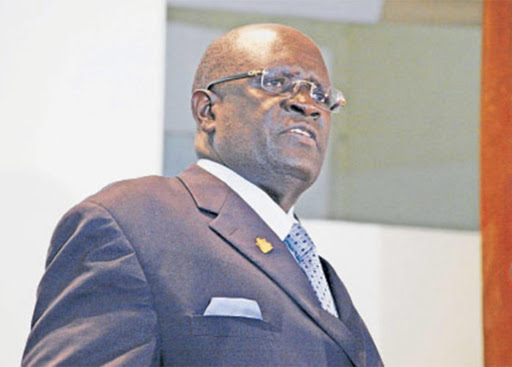 “You are on your own,” Education CS Prof George Magoha tells the two teachers from Nyamninia primary school who were arrested yesterday for allegedly caning and injuring a standard eight pupil  over failure to attain 400 marks in an internal exam.

The two teachers Maurine Otieno and Paul Osogo are held at Yala police station and are due in court on Monday after a video of their pupil accusing them of incessantly administering corporal punishment on him emerged last Wednesday on social media.

CS Magoha reiterated that corporal punishment is outlawed terming the Nyamninia case as pathetic saying no teacher should cane a child because they want the child to perform better.

“Corporal punishment in schools has been outlawed by the Kenyan constitution. Any teacher who does it should know that they are on their own. The Nyamninia case is pathetic because any trained teacher who learnt pedagogy should know that you cannot cane a child to make them perform better,” Magoha said.

He revealed that the law only allows a teacher to lay their hands on a child in a case of self-defence.

“The only instance where a teacher can touch a child is in a case of self-defence where the child is threatening to harm the teacher because some of our children are rowdy and maybe tempted to injure our teachers,” the CS added.

He advised teachers across the country to identify and work on the weaknesses of their pupils to improve their performance instead of resorting to caning.

Prof Magoha also asked parents to take the leading role in molding and disciplining their children instead of giving them money and abdicating the disciplining role to teachers.

The CS was speaking at Bondo Township secondary school during the commissioning of phase two CBC classroom where he revealed that the government targets to complete  the construction of 3500 CBC classrooms before the end of August.

Prof Magoha said a total of 6,495 classrooms had been done in phase one and currently the Ministry is working day and night to deliver the phase two classrooms before the next government takes over.

“Our officers are all in the field and not waiting for reports in the office. We are working throughout and even after the elections we still have a two weeks window to complete our jobs so the public should not be worried,” Magoha said.

In the video Lupita explained that the ants tastes well as her friends talked about other delicacies like crickets.
Entertainment
2 weeks ago

Nandy explains why she was upset on her wedding day

Aq9ine: My 'food blogging' content drove my girlfriend away
Entertainment
2 weeks ago

The Ministry of Agriculture shall subsidize the price of maize flour being produced/sold by the miller for a period of four (4) weeks
Lifestyle
2 weeks ago
WATCH: For the latest videos on entertainment stories

Bonnie Khalwale celebrates daughter after she scored an A- in KCSE