Ringtone gets emotional in court over assault by Alai 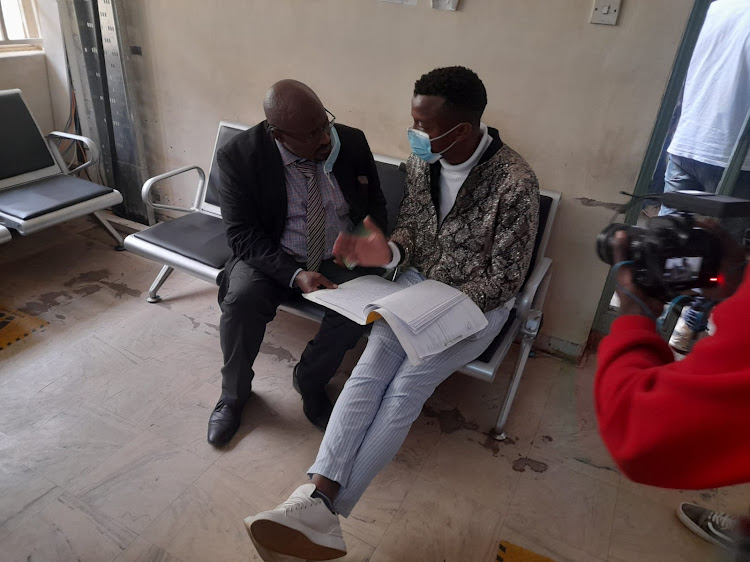 Appearing before Kibera's Senior Principal Magistrate Monicah Maroro, Apoko said that he saved Alai from being beaten by a group of youths.

“I am a public figure and I am not bragging and due to that whenever I go some youths do ask me for money for lunch," added Apoko.

He said that after Alai assaulted him, the youths were angry and he calmed them by giving them some small money.

Apoko was responding to a question by the prosecution on why he was seen distributing money to pedestrians and boda boda riders during the incident.

The artiste could not hold his tears while he was giving his testimony in the assault case against Alai saying that it is against the law for an individual to take law into their own hands.

“I was coming from Runda and was heading to the Kilimani area to meet my friends and I used Lavington way before the incident,” he added.

He said that he was driving his range rover and when the street lights turned red he saw a Subaru car ahead of him.

Apoko said that despite the lights turning green, the Subaru car was still blocking him that he started to hoot. He told the court that he was not the only one hooting over ten other vehicles were hooting at the car that was blocking them.

The witness added that Alai hit his car three times at a roundabout on Oloitoktok Road with a rungu that was presented in court as evidence.

“After hitting the car windows fell and I was hit at the right side of my head where I sustained serious injuries,” he added.

Apoko insisted that the law must be respected because being a public figure, he was humiliated by Alai in public.

He added that he had thought that the Subaru belonged to CIDs but it belonged to Alai whom he had not met before. He said the matter was reported at Kilimani Police station.

During a cross-examination by lawyer Edward Oonge, Apoko was asked whether he knows that a car could stop because it has a mechanical problem or it is preparing to move and he said yes.

Blogger Robert Alai is charged with causing grievous harm to Apoko in July 2020. Apoko is being represented by lawyer Evans Ondieki.

Alai was charged before Kibera senior principal magistrate Phillip Mutua in August 2021, where he denied the charges.

The blogger was also charged with a second count of damaging Ringtone's windscreen, valued at Sh416, 000.

He denied both the charges and was released on a Sh1 million bond or a cash bail of Sh300, 000.

The court warned Alai against commenting on the case on social media either directly or through proxies.

This is not the first time that Baby Uhuru has been seen in public, when he was a year old he was spotted at the Lewa Conservancy during the popular ...
Politics
1 week ago

Judy Nyawira reveals why she doesn't mind her hubby complimenting women
Entertainment
1 week ago
WATCH: For the latest videos on entertainment stories