Sarah Kabu says there is still dram in her marriage

• Sarah said Kabu's daughter is a total stranger to her and therefore, she demands an apology from her for taking her children.

• Sarah added that there is still unsettled issues she does not post on her social media. 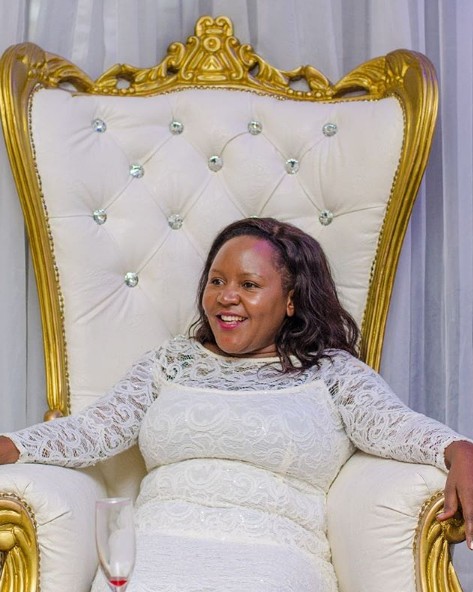 Two months ago, Sarah took to her Whatsapp saying Simon had taken her two children away and she did not have an access to them.

Later, she branded Simon's 24-year-old daughter a 'b*strad' who had taken custody of her children.

Speaking exclusively to Mpasho.co.ke at Akothee's book and EP launch, Sarah opened up saying things have not been ironed from her side.

Sarah said Kabu's daughter is a total stranger to her and therefore, she demands an apology from her for taking her children.

"I was trending because I was defending my children I feel they are very precious and nobody should pull such a string just because you have some rights," she said.

"That one was something that even the strongest woman that you see, if you really want to touch her or shake her, touch her children."

sarahkabu BOLD And TRUE | Radio Africa's fastest and most exciting hub of Lifestyle and entertainment news.

Sarah said that was one of the most difficult phases that she has ever gone through in her motherhood journey.

"I had never imagined that someone can come pick my kids and go with them without my permission. When it happened I became like that chicken who defends her chicks," she said.

She said at the time, nothing mattered than having control of her children back.

"It took me 10 good days without access to my children and it was traumatizing. People would only see one post but I was going through a tough time."

Sarah added that there is still unsettled issues she does not post on her social media.

"Everything has not been ironed since I have not received an apology from the girl and there are still other dramas happening but people just see the tip of the iceberg  on social media you don't the big issues," she said.

"There are a lot of dramas happening in the family which I will not want to discuss on social media but I am a strong woman I now I will be able to sort it off social media."

On whether she is expecting a child, Sarah was coy to discuss the topic but said she 'hoped so'.

"When the right time come we will speak about it."

Sarah said the reason she spoke about her marriage drama was since she did not want people to judge her.

"It is good to be open as people may misjudge you. Some saw me as a jealous step mum but have you ever imagined your children sleeping somewhere you don't know, them being undressed by someone you don't know," she said.

"She could be my husband's daughter but we have no relationship. She is a total stranger and her undressing my children, was scarily.

As much as I am strong, when it comes to my children I am very soft."

Asked if her marriage is okay, Sarah said;

Simon Kabu has for the first time responded to the drama that surrounded his marriage a few months ago after Sarah exposed him.
Entertainment
6 months ago

Sarah Kabu and Simon Kabu suffered a brief separation after Sarah went online to speak about her trouble marriage.
Entertainment
6 months ago
WATCH: For the latest videos on entertainment stories