• Ezekiel Mutua called out Kecobo for what he termed a plot to sabotage new reforms in the creative industry.

• Mutua said the Bill seeks to, among other things, introduce sweeping legislative changes to the operations of CMOs in general and MCSK in particular. 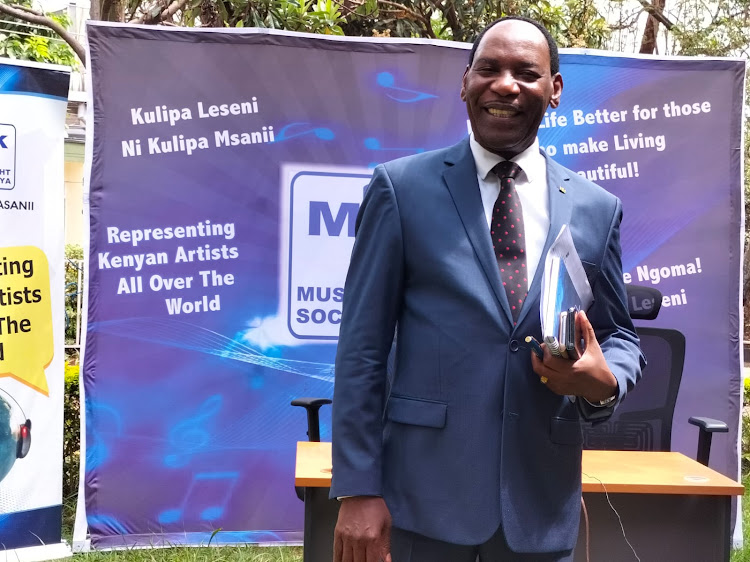 Three royalty distributors have announced plans to reject amendments to the Kenya Copyright Act proposed by the copyright regulator Kecobo.

The Music Copyright Society of Kenya (MCSK), Kenya Association of Music Producers (Kamp) and Performer Rights Society of Kenya (Prisk) questioned the timing and motive of the changes proposed through the Statute Law (Miscellaneous Amendment) Bill 2022.

In a press conference yesterday, MCSK boss Ezekiel Mutua called out Kecobo for what he termed a plot to sabotage new reforms in the creative industry.

"We are deeply concerned with Kecobo's obsession with the management of Collective Management Organisations and its lack of foresight and decency in dealing with such an important sector as Copyright."

He said the Bill seeks to, among other things, introduce sweeping legislative changes to the operations of CMOs in general and MCSK in particular.

"The proposed [changes] will water down the gains provided by the Copyright Act as assented into law by our President."

MCSK alleged that Kecobo had been engaging in backroom deals to take their power to run the industry without the input of other players.

Mutua said Kecobo had introduced an amendment that would have far-reaching implications on the copyright industry in Kenya.

"Outsourcing of government services where they recommend the creation of an agent by the government who will be doing the work of the CMOs is something we also disagree with," Mutua said.

He said MCSK, however, agrees with some sections of the amendments.

"Registration will no longer be granted automatically as CMOs will seek registration with Kecobo before being issued with an operational or an operating licence," he said, adding that it is duplication and bureaucratic red tape that is unnecessary.

MCSK also agrees that the duration of the operating licence should be extended from one to three years.

"We will explore all possible mechanisms to stop the implementation, including going to court to stop the provisions of the Statute Law (Miscellaneous Amendment) Bill 2022 on copyright unless the said copyright changes are shelved in totality."

He added that MCSK will be mobilising like-minded stakeholders to petition the President for the disbandment of Kecobo.

Mutua expressed concern at Kecobo's "lack of foresight and decency" in dealing with serious matters in the copyright scene.

Reason Kamene is confident Ezekiel Mutua will fight for musicians