List of issues Sarah Kabu fought to save the marriage

• Sarah Kabu detailed how the 10-years of unresolved drama got to her nerves that she was ready to leave the marriage and even start her own business venture. 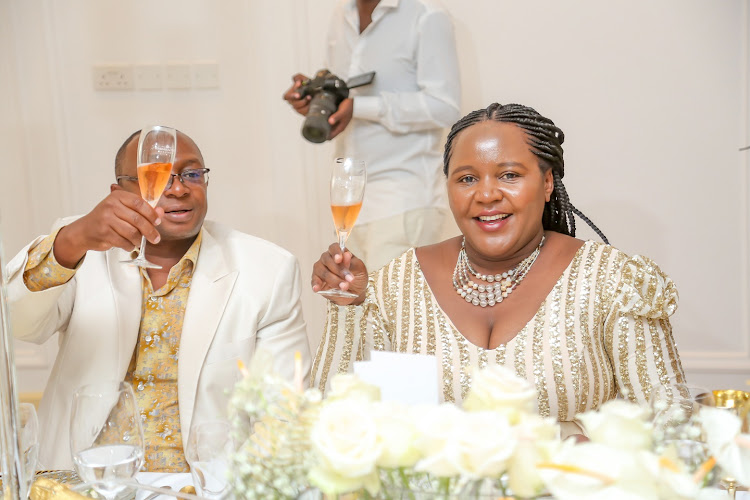 Simon and Sarah Kabu in a file photo
Image: Instagram

Businesswoman Sarah Kabu left many tongue-tied after she went on a public forum and aired her family's secrets and issues for all and sundry.

We got to learn that their issues started way back at the beginning of their marriage and have been multiplying day by day for 10 years running.

Here are some of the issues she will have to deal with together with her hubby Simon Kabu in order to save their marriage.

Sarah Kabu put Simon on blast for taking the kids and disappearing with them. She had no access to them and thus she took to her social media and started ranting about it. This led to a loss of trust between the couple.

When Sarah did an interview with US-based Christina Lewis of The Voice Of East Africa Foundation, she expressed her anger at a lot of issues that cropped up in her marriage.

Together with her hubby, they will have to deal with the issues that caused the anger - that kept bubbling under - so that their marriage can flourish in a peaceful and anger-free zone.

Baggage of the two baby mamas

Sarah Kabu was not happy that Simon has two baby mamas who also have grown children that demand his time and money as well.

As a couple, they will have to work on a blended family formula that will eventually work in their favour as well as the children.

Lamenting bitterly about the matter, she added, "You try to build your empire and then the money goes to support his blood. To me, they are not part of me. There is nothing we can do about it. I take it as a charity project. It has not been a big deal.

I have guided him on some of the good schools he can take them. But for me, he should carry his own cross."

Sarah detailed how the 10-years of unresolved drama got to her nerves that she was ready to leave the marriage and even start her own business venture.

This is after she told Christina Lewis, "One of the baby mamas is very dramatic sometimes she insults him, so he has invited me to go and meet them. He had decided to bring one of the children into our family and I refused.

I asked him to give them all the support they need since I needed my neat family. They wanted to bring one of the babies by force. I stood my ground from the word go."

Adding, "If we part ways, I also expect him to support my children. I told him I did not want drama. I did not pick him up from one of his houses. I found you a miserable young man and we have built ourselves."

She explained, "Since we did the public display of gifting our children property, they have been very aggressive. Sometimes I am stressed."

Pent up anger against slays queens

For the longest time, Sarah has always cautioned slay queens from DMing her husband because she reads his direct messages and also manages his social media.

But the spicy DMs kept coming. AS a couple, they will have to get modalities to deal with these third parties who want to join their marriage bed and life.

Sarah Kabu revealed that her marriage only shed light on the good, happy times and not the bad and depressing moments.

Speaking to Christina Lewis she said, "I reached a point and said I did not want to live a fake life anymore. I went through so much in my marriage. I will live my real life.

People were getting too inspired by our story and I was like I am only showing the good part of my life and you are not seeing the bad part.

People look at us as soft people and we have become a soft target for bad people. That is why I do some controversial things so people can also see what it really is like."

In a video that has since gone viral, Sarah Kabu can be seen shaking her assets close to her hubby, Simon Kabu.
Entertainment
1 month ago

'You lied to me that i belong to you,' Simon sings to Sarah Kabu

Sarah was left in awe, as she laughed and listened to Simon Kabu singing.
Entertainment
2 months ago

Simon Kabu's post after Sarah apologised for dragging him online

Simon Kabu's response has been to keep it professional on his social media and not talk about the matter.
Entertainment
2 months ago

Now, Sarah Kabu has changed tune, and wants back her marriage complete with the baggage of the two baby mamas and 10-years of unresolved drama.
Entertainment
2 months ago
WATCH: For the latest videos on entertainment stories