• The images of the tattered, distressed Balenciaga shoes were shot by photographer Leopold Duchemin.

• Like Maina Kageni, Eric Omondi has bought 2 pairs of the Balenciaga shoes at 213K each. 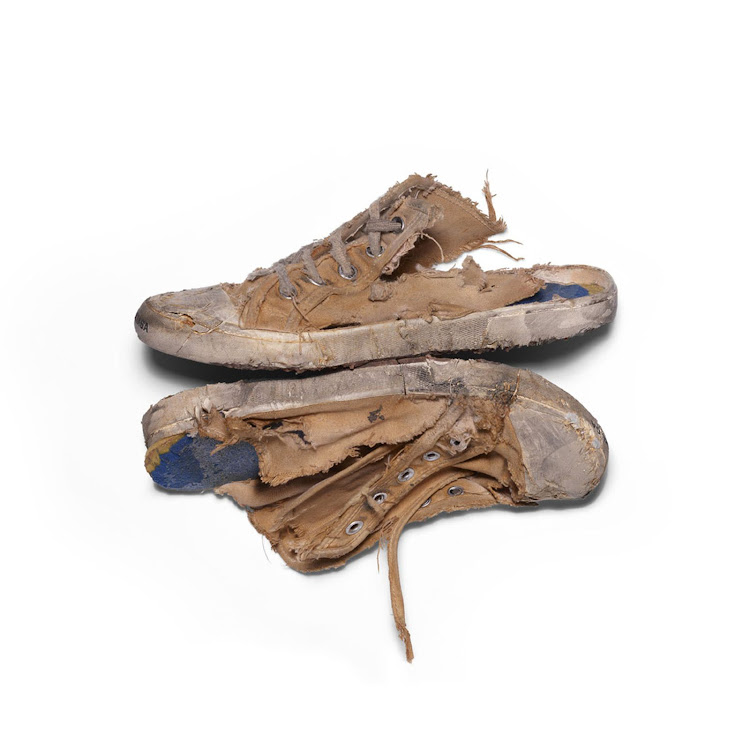 Radio King, Maina Kageni has ordered 2 pairs of Balenciaga destroyed sneakers which are currently going for a whopping 213K.

This he revealed to his co-host during the Morning show.

Mwalimu King'ang'i says the shoes are not worth the hype.

"I have heard there are shoes being sold by Balenciaga, wamezitowa kwa dustbin. Kwani people do not remove seeds from the bang they smoke? Ni nini hawatatuonyesha? If shoes get torn just throw them away, " he advised.

To which Maina Kageni responded;

"I have ordered 2 pairs of the worn-out Balenciaga shoes."

Mwalimu could not understand how his co-host Maina Kageni can spend such an amount when his kids (Mwalimu's) need school fees.

Comedian Eric Omondi says he has bought two pairs of the Balenciaga shoes that are retailing at SH 213,000 each.

The images of the tattered, distressed shoes were shot by photographer Leopold Duchemin.

The images have gone viral following Monday's launch of the couture brand's new Paris sneaker, with outrage at the appearance of the high tops swirling online.

According to the fashion house, only 100 pairs of "extra destroyed" sneakers will be available to buy for $1,850.

Meanwhile, the non-limited edition, and less roughed-up versions, are being sold on the Balenciaga website for $495 and $625, depending on the specific style.

Balenciaga describes the sneaker as a "retooled classic design," which is finished with "distressed canvas and rough edges, affecting a pre-worn look."

Balenciaga is most known for revolutionizing women’s fashion with never-before-seen shapes in the mid-20th century, such as the “ballroom hems” of the early 1950s, the “semi-fit” lines of the mid-50s and the introduction of the “sack dress” in 1957.

Miana Kageni gushes about Shiro, his vavcay mate. Shiro wa Maina, "She is the best, the loveliest person ever, the most fun person ever and she is a ...
Exclusives
9 months ago

'I was gonna die,' Maina Kageni talks about being overweight

'I was gonna die,' Maina Kageni talks about being overweight
Exclusives
1 year ago
WATCH: For the latest videos on entertainment stories