I miss being on stage-Consumator admits (Video)

• When am working anytime am resting I write down jokes and ideas-Consumator. 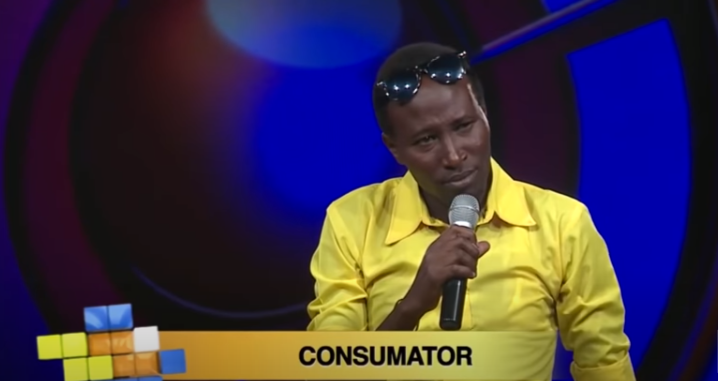 Comedian Consumator has revealed that he misses being on stage. He however says he plans on unveiling his new online show dubbed 'Truth Be Told'.

Speaking during an exclusive interview with Mpasho, he said,

"I miss being on stage. That is why I have a book I carry everywhere I go so that I can write my jokes. When am working anytime am resting I write down jokes and ideas.

A breakthrough for me and I always carry the book to prepare myself for the next point of my life. I perform in church but some of these guys do not know what we go through as comedians."

Consumator says most people fail because of their ego.

"What is making most creatives suffer is their ego. It is something that made me make mistakes along the way."

On whether he plans on going back to Churchill's show, Consumator added,

"My last show in Churchill show was in 2019. Right now I want to do something to help grow my brand. I can't be on Churchill forever because new talents are coming. I would do appearances once in a while but not consistently."

My friend kicked me out like a dog-Churchill comedian, Consumator

"Stigma from my family and close friends in the industry. They think I should not have come out. I will get a solution." - Comedian Consumator
Entertainment
1 month ago

"I have been raised in the village with a lot of struggles and I understand things do happen. This story is about those small painful steps..." - ...
Entertainment
1 month ago
WATCH: For the latest videos on entertainment stories