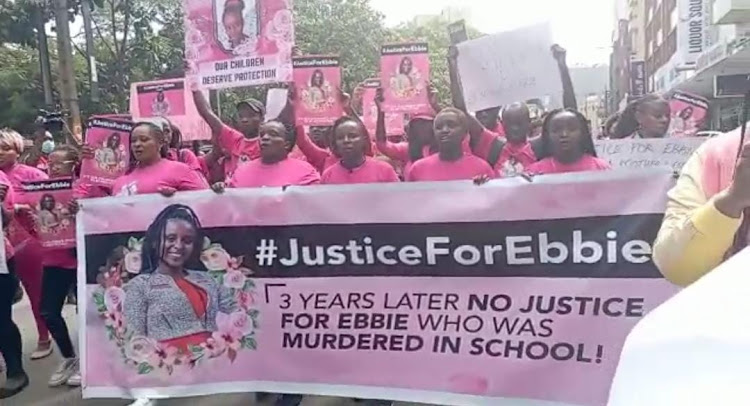 Kenyans matching to the Presidents office seeking for Ebbie a student who died in school
Image: Kalondu Musyimi

Kenyans from various walks of life are today matching President Uhuru Kenyatta's office to demand justice for a student Ebbie who died in school three years ago.

Ebbie was a Form 1 student at Gatanga CCM school and she died after allegedly being punished by the school's deputy headteacher.

Speaking to the press this morning, Ebbie's mum, Martha Wanjiru said she organised the match since justice has taken too long.

She added that she wants the intervention of President Uhuru since those responsible are well known but are still walking freely.

She is demanding that her daughter's killers be arrested.

"My name is Martha Wanjiru Samuel, I am Mama Ebbie, a mother and a citizen of this country. I organized this match to walk to the President's office because we need his intervention in this matter.

It's been a long time coming. It's been going rounds and circles. It's been fake and false promises."

"I think I am just tired of waiting since my daughter's killer is known to DCI and yesterday they tweeted.

They have not arrested them, they are just tweeting. We are walking to the President's office so that the president himself can intervene.

My daughter is a Kenyan in spite of what anybody says, she was born here and she is a citizen of this country.

That is why I need the intervention of my president who I cast my vote to put in power. Thank you so much.

Recently, Journalist Lynn Ngugi followed up on the matter when she interviewed Ebbie's mum on her YouTube channel.

According to a tweet by DCI, investigations are in advanced stages.

It has been established that the girl was assaulted severely by a senior administrative member during evening preps, on allegations that her hair had been styled contrary to school regulations.

The DCI, in a report on Wednesday, explained that it had taken over investigations into the case in January this year.

"The detectives sought to record statements from witnesses who include [the student]’s friends and classmates and on January 11, a team of seasoned homicide detectives was dispatched for the assignment," read the report.

'I Dont Want Costs Covered, I Want My Daughter,' Cries Natalie's Mother As She Shares The Only Letter She Wrote To Her

'I Dont Want Costs Covered, I Want My Daughter,' Cries Natalie's Mother As She Shares The Only Letter She Wrote To Her
Lifestyle
4 years ago