He heaped praises on Diamond Platnumz

• Bien said Kenyans excuse the whites for their poor mastery of language but not fellow Africans. 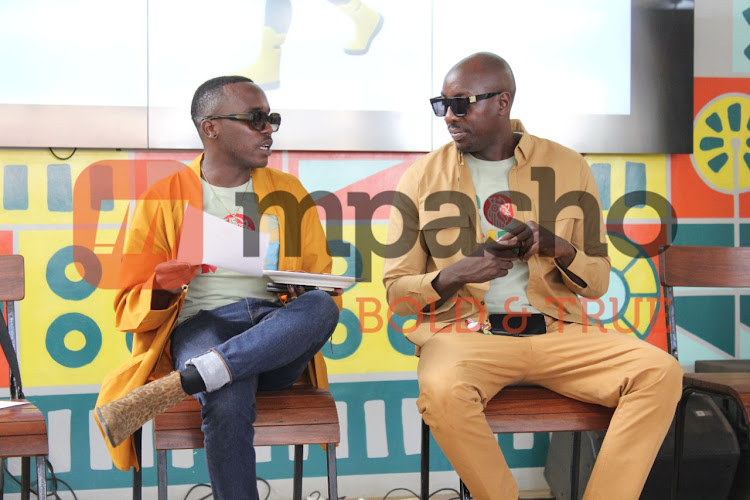 Bien chatting with Chimano during the launch of Sol Kids
Image: Saidi Abdalla

Singer Bien Baraza has called out Kenyans who have been mocking Diamond Platnumz for his broken English.

In an exclusive interview with Mpasho, Bien said Kenyans excuse the whites for their poor mastery of language but not fellow Africans.

"Hiyo ni upuzi! I see French people here, Germans...Danish.. do not know fluent English and you do not laugh at them... you think it is sexy. Many people talk English with an accent..that means you know another language," Bien said.

He heaped praises on the Bongo star, saying he is an outstanding musician.

"I congratulate Diamond...he is doing great work...making money moves. I can tell people to stop being stupid, English is not a measure of intelligence. I pity those who hate on him."

Bien also revealed that he plans to get two kids, and both will be taught the Luhya culture and language.

"They will have to learn Luhya perfectly... the Isukha. English is up to you...Luhya will not die if I do not teach my kids. WE are coming from a point where our parents would lecture us in Luhya. For me I want to talk to my child in Luhya when having fun...it preserves culture," he said.

Bien insisted on the importance of African preserving their languages and the culture that comes with them.

He also spoke on the Young Famous & African series, saying he could have turned down the offer to be part of it if Netflix approached him.

"I don't see myself in that genre of reality TV. Sol Family is different, we are not glossy and glam...we are real."

The Young Famous and African reality show is on Netflix.
Entertainment
2 months ago
WATCH: For the latest videos on entertainment stories