People thought I was abusing drugs-Phelix Owiny on vitiligo struggles

• Vitiligo commonly happens on the face, neck and hands, and in skin creases. 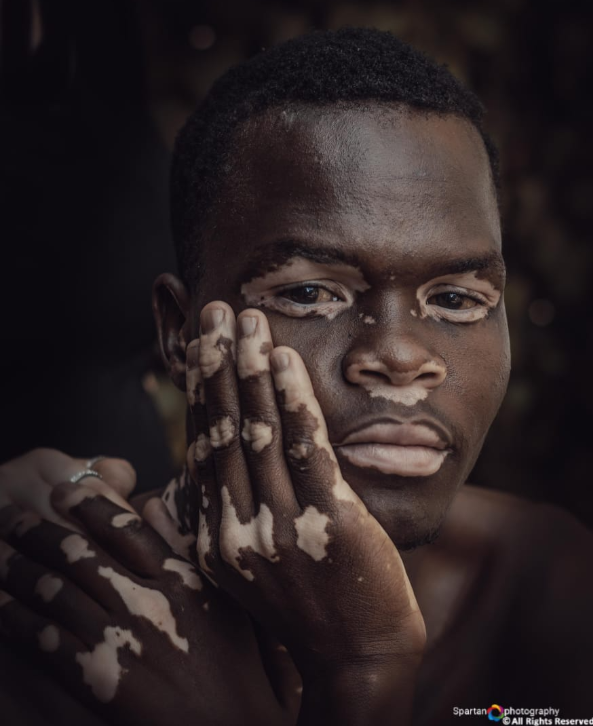 Diagnosed with vitiligo in 2002, Phelix Owiny says life has never been the same. The 22-year-old Biomedical Engineering student says he has faced so much stigmatisation.

Vitiligo is a long-term condition where pale white patches develop on the skin. It's caused by the lack of melanin, which is a pigment in the skin.

Vitiligo can affect any area of skin, but it commonly happens on the face, neck and hands, and in skin creases.

Speaking to Mpasho.co.ke the soft-spoken young man says even his parents thought he was doing drugs.

Other people thought I had been burned. I was taken to the hospital but I was just given some cream to apply by then we were just trying to treat what we didn't know."

Woishee! Nominated Nyeri MCA Suffering From Vitiligo Talks About The Pain And Shame She Went Through

Woishee! Nominated Nyeri MCA Suffering From Vitiligo Talks About The Pain And Shame She Went Through
Lifestyle
4 years ago

Owiny says with time the vitiligo spread to his neck, this made people afraid of interacting with him due to the limited information they had about the condition.

"As time passed it (vitiligo) started to spread on the neck area. That's when the hospital visits started, we visited so many hospitals spending huge amounts of money only to learn that what we're struggling with is Vitiligo and it doesn't have a cure ."

A clueless Owiny had to learn to live with the condition, but it has not been a walk in the park.

"My self-esteem went down. I kept covering myself up since people viewed me differently. Some would make fun of it some would laugh at me but with time I learned a lot. With time I started meeting people with the same condition that's when I started to accept myself."

The lad says accepting himself was one way of him dealing with the condition and avoiding getting depressed over the constant stigmatization.

"Acceptance is the first medication to Vitiligo, it boosts your self-confidence and makes you stand out, nowadays I embrace my flaws because I know they are beautiful."

Owiny says like most people living with the condition he has been denied chances to participate in events just because he looked different.

"Yes, I have been denied chances before. Some time back I couldn't even participate in some extra curriculum activities just because I looked different.

Some thought I would affect them, the treatment made me feel really bad. We're all the same and should be considered equally."

Despite all the negative energy, Owiny says he is happy about the progress he has made.

Unlike before he now enjoys the stares people give when they see his 'patched up' body. He says vitiligo is like an artist while he is the canvas.

"My best moments are when I pop up in a place and people stare, some get shocked. Some are always like aww "you look beautiful and unique" then I will be like it's Vitiligo and it's beautiful."

Most people are still clueless about Vitiligo, some associate the condition with family curses and witchcraft.

What is Owiny doing to educate society about the skin condition?

"We have an organization called Royal Patches Foundation a group spearheaded to create awareness on Vitiligo through the Entertainment Industry.

It creates awareness through Art, Music, Modelling, Acting, Dancing, and Events in General! I'm a model so every opportunity I get I use it for awareness.

I also use my Instagram page @kenyan.vitiligo.finnest a lot to interact with people living with vitiligo. I also interact with those who don't have the condition but would like to know more about it."

"Most people who have Vitiligo hide out of fear but when they see how you interact with it they also accept their condition.

We're also just appealing for the government to help us in this journey."

Felix says dating has not been easy due to the misconceptions people have about vitiligo. The young man who was born in Kisumu enjoys meeting new people and making friends during his free time.

Do you know anyone battling with vitiligo who has no moral support? Get in touch with  royalpatches254@gmail.com

'I almost committed suicide after being diagnosed with Vitiligo,' musician narrates tear-jerking story

'I almost committed suicide after being diagnosed with Vitiligo,' musician narrates tear-jerking story
Lifestyle
4 years ago

Facts 101: All you need to know about the skin condition Vitiligo

Facts 101: All you need to know about the skin condition Vitiligo
Lifestyle
1 year ago
WATCH: For the latest videos on lifestyle stories