She rarely got sick, her death was very sudden

• 9 months ago, she testified in the ongoing court case where Jowie is the prime suspect in the murder of Ms Kimani. 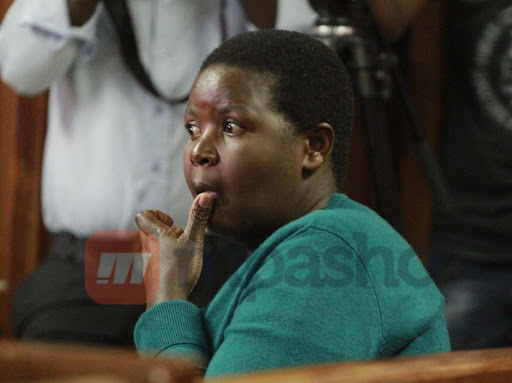 Pamela Kembo, the nanny who testified in the ongoing murder trial of businesswoman Monica Kimani passed away.

Kembo gave an account of how the police arrested Jowie from their Langata apartment that he was sharing with media personality Jacque Maribe.

Kembo was TerryAnne Chebet's nanny before she started working for Maribe.

9 months ago, she testified in the ongoing court case where Jowie is the prime suspect in the murder of Ms Kimani.

Kembo narrated how cops arrested Jowie and locked up the house as a crime scene.

Then Jacque's dad called her and told her to take the child to BuruBuru, saying they would not be staying over at the house. When she peeped into the house it had been turned upside down.

"I agreed to go to Buru Buru in an Uber. The next day I asked Jacque's mum to give me fare to go to their home. I had called Terryanne Chebet and told her I am going home but she told me to go to her house in Kilimani instead of going to Kitale."

Leaving Buru Buru, Jacque's mum gave her Ksh 1000 for transport. She got to Terryanne's house and stayed there.

Since then she has never seen either Jacque Maribe or Jowie. She says she was on good terms with Jacque. But not Jowie.

"He at one time accused me of stealing the house rent. In August 2018 I wanted to resign but Jacque's mum begged me to stay."

Read the rest of her testimony in the related article below.

Maribe's house manager, Pamela Kembo, has testified and given an account of how the police arrested Jowie from their Langata apartment.
Lifestyle
2 years ago

In a recent interview with Mpasho, Terryanne narrated how Kembo's death affected her family.

The nanny died while in Terryanne's house last year.

"When she passed on, she was in the house, with the kids alone. I had gone jogging at Ololua forest, my kids called me in a panic, called my landlord. By the time they got to the hospital, it was too late," she said.

Speaking to Mpasho, Terryanne shared that the loss of her nanny left her heartbroken, and emotionally weak.

"She was very close to us, sometimes I ask God; Why? I had to pray and accept that this is what God has chosen. Grieving for me was long and hard, and it really affected my daughter. It affected me from working, my relationship with people. I just wanted to be alone."

The sudden loss of their family member left Terryanne's firstborn daughter broken. It took the help of a counsellor to make her understand why it happened.

"I have a friend who is a counsellor, she went and stayed with her for about 2-3 weeks. I had a lot to do, in and out of the morgue because I had to organize everything. We will never understand, but God will give us peace and comfort," Terryanne narrated.

The postmortem showed she had a blood clot in her lung.