• "We know we can compete and one of us will win the nominations after competing in a fair environment." - Karen Nyamu. 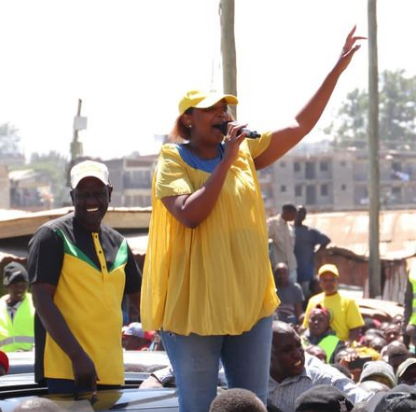 Politician Karen Nyamu has hit the campaign trail to seek election as the Nairobi Senator in the August polls.

The mother of two, who has been a big name in the showbiz industry joined William Ruto's UDA Party last week.

Mpasho reached out to Karen to find out why she was attracted to the yellow and green political outfit.

Karen said she had tried joining another party but it was difficult.

"UDA is a place that accomodates everyone, there are partys that have owners. Like in Nairobi Senatorial post, there are 4 other aspirants, very young guys.

We know we can compete and one of us will win the nominations after competing in a fair environment. There are parties where you can not progress because they have predetermined candidates," she explained.

In 2017, Karen contested the Nairobi Woman Rep position but lost. But why didn't she give a second shot at the Woman Rep Position?

"When I joined politics I wanted to be a woman rep in order to represent women. But after working with the county as a director of Nairobi Waters, I know the impact that Senate has in county governance. I saw it best to use my law background in the Senate."

Karen Nyamu to welcome child with Samidoh next month

Karen Nyamu said her pregnancy has been very smooth that she has even been going for her campaigns as heavy as eight months.
Exclusives
4 months ago