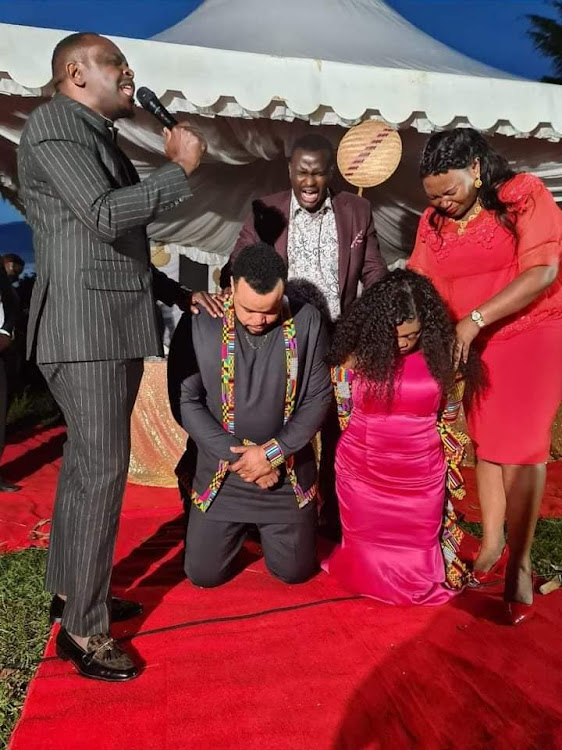 Celebrated gospel singer has moved on six years after she separated from her baby daddy, Prophet Victor Kanyari.

She held a dowry ceremony with her fiancé, only identified as Tash over the weekend.

Through her Instagram, the 'Eleventh Hour' singer announced to her fans on Instagram by sharing a picture of a Porsche Cayenne branded 'Bayo & Tash' ruracio (traditional wedding) and captioned it; "How it started."

Later on in the day, she shared more photos from her colourful event.

The event took place at her mum's place with only a few friends were invited.

Mpasho.co.ke reached out to her ex-husband and father of her two children, Prophet Victor Kanyari, who said he was called to attend the ceremony but when it was in progress.

"I was invited but I could not make it since I was in Nandi. I think it is dowry payment," he said.

The man of God expressed disappointment saying he was invited via a phone call.

Did he then call to congratulate the mother of his kids?

"I didn't call nor send a present since they already have my kids as my present. My kids were part of the lineup and so I was well represented. My blood was still there."

He said he kept an eye on social media where the news and photos were shared.

"I saw the photos on social media. It was also trending and also, I have seen it on blogs and it was indeed colourful," he said.

Had he been invited in advance, Kanyari said he would have attended.

"I was called on the same day and when things were already underway. Imagine, the event is at 1:00 pm and they are calling you at that particular time, kama inaendelea."

He said he has no bad blood with anyone nor did he intends to spoil their day.

"That was bad, they would have invited me two days maybe for me to prepare in advance."

"Serving people is my calling and I am blessed. The money God has given me, I will share with the needy." - Pastor Kanyari
Exclusives
1 month ago