• Other than the illness, Mama Rosebella also suffered a stroke after the death of her daughter. 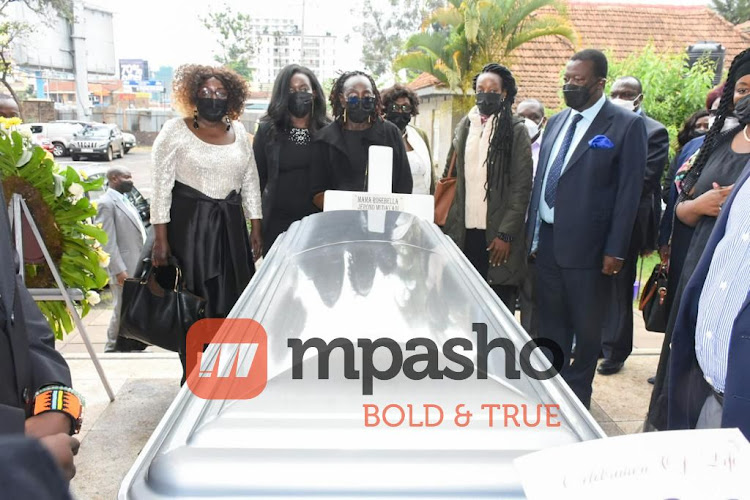 The family of Musalia Mudavadi held a requiem mass for their late mother, Rosebella Jerono on Thursday.

The 82-year-old Rosebella, who is a step mum of Musalia Mudavadi died on November 24 in Virginia, USA surrounded by family members.

During her requiem mass, the family revealed that Rosebella had been ailing for years and died of a condition called Vascular Dementia.

"Mama Rosebella was diagnosed and died of Vascular Dementia. Vascular dementia is caused by problems in the supply of blood to the brain cells due to conditions such as: High blood pressure (hypertension), irregular heart rhythms or damage to brain arteries from the disease.

Dementia as a disease - goes through stages, they say seven stages - from early-onset dementia to end-stage dementia," they said.

Other than the illness, Mama Rosebella also suffered a stroke after the death of her daughter.

"Mama suffered a stroke in 2004 (we believe she had a broken heart from the loss of our late sister Marilyn ljaya). Unfortunately, she suffered the stroke in her home in Budira, Sabatia and did not receive proper medical care in time.

According to medical literature, the first 24 hours are the most crucial for stroke patients to get proper medical care. Mama suffered cognitive impairment and loss of independence gradually. We could see the changes she was going through between 2005-2009."

1n 2010, her children made the decision to take her to live in the USA so they could care for her. During her stay in the USA, she lived with her daughter Reba Munyasa who selflessly cared and provided for her Throughout her illness, she never lost the spark in her eye.

She bore her illness stoically, despite what she was going through. With Grace and the Peace of God that surpasses all understanding, she took her final bow on 24 November 2021, surrounded by her family."

6 provisions Babu Owino has to fulfil for DJ Evolve

If any party fails to comply with any of the terms of these agreement,either party shall be at liberty to rescind the agreement or to sue  for the ...
Politics
7 months ago