Yesterday, Felix Orinda, popularly known as DJ Evolve, withdrew the case against Embakasi East MP Babu Owino in which the legislator was accused of attempted murder.

The state will still charge the legislator with a second count of behaving in a disorderly manner while carrying a firearm.

The reason for Dj Evolve withdrawing his case against Babu was based on alternative dispute resolution provided for under article 159 of the constitution, which states;

(c) alternative forms of dispute resolution including reconciliation, mediation, arbitration and traditional dispute resolution mechanisms shall be promoted, subject to clause (3);(d) justice shall be administered without undue regard to procedural technicalities; and(e) the purpose and principles of this Constitution shall be protected and promoted.

This meant that the Embakasi East MP would settle with Mr. Orinda with the Dj's health being of prime importance.

In the court documents that have emerged, Babu has/will pay all the hospital bills for Mr. Orinda, while also purchasing an apartment for him. 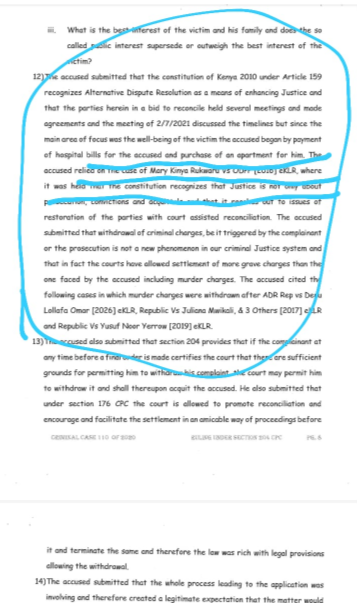 Why Babu Owino's wife has not given up on him

His wife Fridah Muthoni said the reason she has never given up on him is that he was a loving man with what she termed as a heart of gold.
Politics
9 months ago