'This album is about being unlimited,' - Alicia Keys 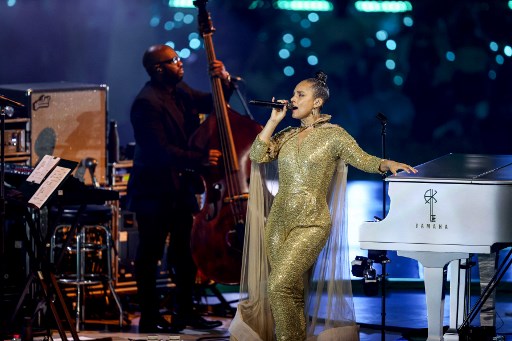 US singer-songwriter Alicia Keys performs during a concert at al-Wasl Plaza at Expo 2020 Dubai in the gulf emirate on December 10, 2021.
Image: AFP

American Soul and R&B icon Alicia Keys urged young people in the fast-changing Gulf Arab region to "continue to be bold" as she prepared Thursday to release her latest album.

The 15-time Grammy award-winner was set to unveil "KEYS" at midnight (2000 GMT) in the wealthy desert emirate of Dubai, followed by a live concert on Friday evening.

"Continue to be bold, continue to be one of a kind," Keys told AFP in an interview at the site of Expo 2020, when asked about her message to young people across Gulf Arab countries.

"Don't doubt yourself; you have everything you need inside of you," she added.

Large-scale social and economic changes are underway in the energy-rich region, most of whose 57 million residents are under 30 years of age.

In Saudi Arabia, reforms have included allowing women to drive and mixed-gender crowds at concerts -- unthinkable a few years back -- although a strict crackdown on dissent remains in place.

Laws are being amended continuously in the United Arab Emirates, which has eased a ban on unmarried couples living together and loosened restrictions on alcohol.

This week, the UAE announced it was adopting a Western-style Saturday-Sunday weekend, moving away from the regional norm of Friday and Saturday.

Both countries are leading a regional drive to diversify oil-reliant economies by empowering entertainment, tourism and business.

"It's always about the growth and the progress in it. And I feel like that's what this music is about," said the singer-songwriter.

Keys, 40, said the double-album, which includes an additional edit of each song, is also about "going back to the basics".

"It really is about coming, homecoming. About coming back to yourself, about me coming back to myself which is why I call it 'KEYS' and really just owning what I do and continuing to explore it," she said.

Keys will perform at the domed Al Wasl Plaza, centrepiece of the vast $7 billion Expo site where organisers are hoping to attract 25 million visits during the six-month world fair.

The new album is her first since the start of the Covid-19 pandemic that has proved exceptionally challenging for the music industry, with billions wiped off its value.

"During the pandemic, I think there was so much opportunity to really get connected with the people you actually love and to understand what means something to you," said Keys.

"I see things completely differently now. I think we all do," she added.

"I really learned that there is a bit of a divine order for the music that I had created because I had no idea that we would have a pandemic but yet the music fit so powerfully with what we were experiencing during that time."

Keys, who is also an actress, an author and an activist, is gearing up for a summer world tour in 2022.

In March, she will release "Girl On Fire," a graphic novel based on her hit of the same name.

It tells the story of 14-year-old Lolo Wright who discovers she has telekinetic powers while protecting her brother from a cop who pulls a gun on him.

Video: Spiderman: 'Maybe I want to set up a shop and be a dad'

Tom Holland wants to take some time to “think about [his] future” for the next five years.
Entertainment
1 month ago