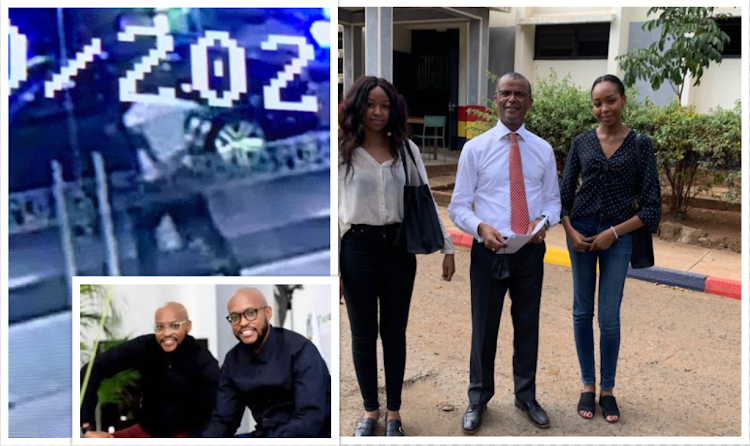 Ndichu brothers; Eddie and Paul and the Murgor sisters; Stephanie and Cheryl.

City lawyer Philip Murgor has released a statement claiming that his nieces Cheryl and Stephanie Murgor are being harassed in a bid to drop assault claims against the Ndichu twins, Paul and Eddie.

The sisters were attacked at Ole Sereni Hotel on October 17, 2021 and the incident was reported at Akila Police Station together with Samuel Ramdas and Patrick Koech.

The statement reads after they made their report, "Instructively, the Ndichu brothers and Munira Hassan did not report the incident at Akila Police Station if at all they felt aggrieved. The investigations were shortly thereafter taken over by the Langata Deputy DCIO.

It is now over 5 weeks since the incident, and no charges have been preferred against the perpetrators, with no explanation offered to our clients, or the public at large."

Murgor went ahead and stated that the sisters are also being charged for affray. This is after it was reported that the Ndichu twins will be charged for assault and malicious damage of property.

"A curious development occurred when I received a call from the Deputy DCIO Langan, asking me to present our clients, Cheryl and Patrick to record a statement, provide fingerprints, after which they would be charged alongside Munira for the offence of Affray. This is against all known procedure, whereby all parties, are invited to record normal witness statements and present their witnesses at all before a decision is made to charge by the DPP."

Adding, "We reject this distracting sideshow, and call upon the DPP to give appropriate directions on how the offence of affray should be investigated m the light of the explanation of self-defence offered by Cheryll and Patrick in the statements already recorded."

The statement continued, "All these actions are tailored to exert undue pressure on our clients, particularly the young ladies who have had to undergo treatment after the vicious assault, and counselling for trauma."

Murgor noted, "Stephanie and Cheryl were at the time, and remain extremely vulnerable, both as younger persons, and victims of a vicious attack, by wealthy, highly influential, and politically correct perpetrators, which on irrationally triggered when Stephanie rejected the sexual advances of the Ndichu Brothers. This can only be classified as Gender-Based Violence (GBV)."