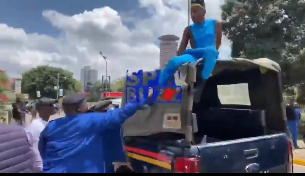 This piece should have been written the first time Eric Omondi went on his rant, the first time he expressed issues with the current state of Kenyan music. The problems are so tiny that only an outmoded fossil would find them worthy of discussion.

He took to his Instagram and wrote, "Entertainment industry in Kenyan is asleep. Our artists have become redundant, predictable and boring and it is a good space for you to take over. Most if not all artists are no longer creative.

We are living in the dark ages of Kenyan music. Tanzania and Nigeria wanatupiga, (Nigerians) are here every weekend and Kenyan musicians have become curtain-raisers.

The industry is a disgrace, and I am speaking to all artists. We need to wake up na tuwache kufanya vitu haraka haraka watu kama Diamond wasitung'arie.

"We have become clowns in our country. Etana was here, Omah Lay. We are not blaming any corporate, I am blaming the artists. We need to wake up and put in the work. Eric Omondi puts in the work.

I am the only artist who pats myself in the back. Nobody works as hard as Eric Omondi and you know it. So we need to call upon our entertainers to wake up. We are a cemetery bro."

It so happens that the loudest; the finger-pointers are part of the problem. It would be a full-time job to respond to every critic who thinks Kenyan music is only immorality and curse words.

How can you mention the explicit and materialism content without highlighting the rise in lyricism and overall creative quality?

Are you so blinded that you completely refuse to acknowledge the beauty in the Kenyan music industry in 2021?

To Eric Omondi, nothing is working. I expect this from old-timers like the infamous Deputy Jesus but not Eric Omondi, a creative voice, to have such a dippy opinion.

Nonetheless, his recent antics have diverted him from comedy and into drama. The kind of drama that the industry doesn't need.

Since I can remember there's always been a stigma that Kenyan music is sub-par to regional music; it is only ignorant, shallow, and everything that degrades the Kenyan moral fibre - whatever that is. I won't deny that the media is a tyrant that gives attention to raunchy songs and foreign music a lot of times.

However, the scales have never been more balanced.

We have more than one toxin to choose from. Did you know Wakadinali sold out all their Victims of Madness dates earlier this year? That Sauti Sol, Bensoul are Award-winning Grammy Songwriters?

Do we consider these artists lazy and uncreative? I want to make sure that Eric Omondi understands we can go to the club and wonder in the enjoyment of Ethic and go home listen to Kitu Sewer.

The usage of the words "lazy" and "put-in-the-work" in his rant gave me a feeling that he is an agent provocateur. Eric Omondi would have resided deep in Uranus, without WiFi, for the last six years, to believe that the Kenyan music industry is uncreative and boring.

Are we going to pretend that Wyre hasn't founded BLOOW, a platform that leverages blockchain technology like NFTs for artists to monetize their work?

I haven't even touched on the visuals. Octopizzo took our breath's away with his short film/music video, Swaga Za Wapi. Blinky Bill's No-Touch AM is unbelievable.

Chris Kaiga has turned his acclaimed music into short films, and Matata has dropped nothing but spectacular videos to accompany their music. All this creative spirit and you want to claim a need for "people to wake up"?

Deep down, what really incensed me is Eric's lack of a solution.

While he appears to offer suggestions, his theatrics show that change is not a priority. You can beat the dead horse all you want, post on Instagram till your fingers bleed, fake arrests, but what are you really doing?

When King Kaka is crowned one of the greatest, it's because of how much potential that he has brought into the game. Who has Eric Omondi opened a door for? The internet is a playfield of creatives working to be seen.

If you see the entertainment industry as an orphan, go out and adopt a game-changer, give a voice to the saviour of Kenyan music!

You have the key, passion and knowledge of what it takes to make it. Why spend time complaining about that which plagues us, when you could present the remedy that will save the game you find so unimpressive?

When I hear music like High Renainssance's album, Reign, I get excited. He is soulful, lyrical and thoughtful; creating a storytelling experience that feels both old and new.

You can tell how much detail and thought went into the album in every song.

Give this kid a louder voice! I got excited when I heard the story of how Vallerie Muthoni worked on Spicy SZN.

Not only did she buy the beat off Youtube, but she also harnessed her friendship to create a visual delicacy. Get this kid a budget!

When you have podcasts like Adoveli documenting what's popping, Tweeps like Kophen introducing bubbling stars with her playlists, how can you not find anything inspiring?

Khaligraph Jones just produced a rap challenge and gave out more than a million shillings to artists, Polycarp is showing men how to be present and loving fathers. Add something positive to this spectrum or shut up.

That goes to everyone who agrees with Eric Omondi's sentiments.

He says he intervened to have Eric released from police custody.
Politics
2 months ago