• Aaron Rimbui has worked with Sauti Sol on several projects. 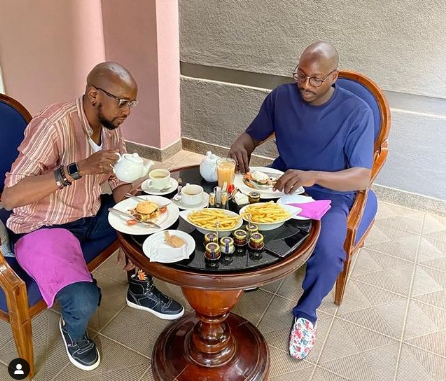 Bald Men Bien Barasa and Aaron Rimbui have established a relationship that has resulted in the release of an album.

Despite their album premiering weeks ago, Bien and Aaron have been close friends for 12 years.

The Jazz Maestro has worked with Sauti Sol on several projects.

Speaking to Mpasho during the launch of Hustle, Bien shared his journey with Aaron Rimbui.

"He has played with Sauti Sol so many times, he helped top produce Kuliko jana, Live and die in Africa.. we have a single with him in his album.

It has been a long time friendship, working with him is amazing, he is an amazing musician. Everything he stands for and his craft is so commendable," he said.

Aaron, who lives in New York is in the country for the Bald Men projects.

However, the two have different personalities. While Bien full of  'Mbwe Mbwe' , Aaron is a chilled man, who takes things slow as in the Jazz motions.

"I am pop and he is jazz, Aaron is a very reserved... chilled.. and i am chaos. I think that is why the music is beautiful," Bien shared.

The Bald Men Anthem has been made available to fans on Hustle App, a central hub for creatives to manage the entirety of their business from creating storefronts, adding physical and digital products, recording orders, and accepting payments.

'My mum would be very proud,' says Samidoh

Samidoh grew up an orphan, as he lost his father when he was only three and later lost his mother after joining form one.
Entertainment
2 weeks ago