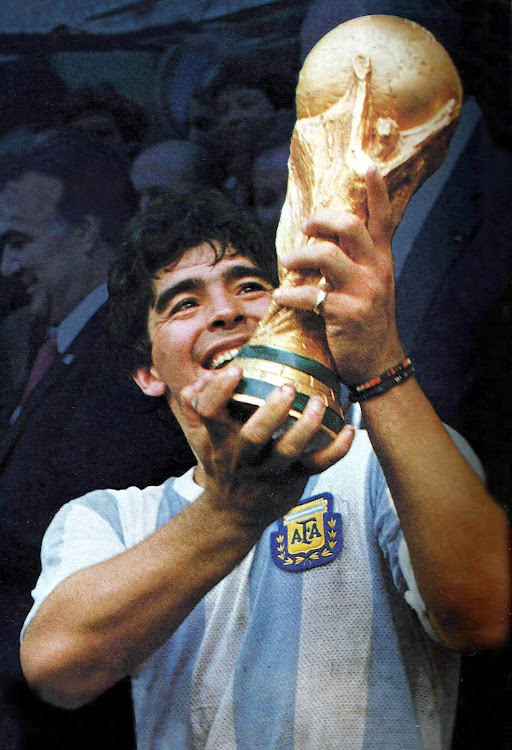 Members of the "Maradonian Church" in Argentina came together Saturday in worshipful celebration of the memory of beloved football idol Diego Maradona on what would have been his 61st birthday, just weeks before the first anniversary of his death.

Chanting "Ma-ra-do...Ma-ra-do...," these devoted fans of player No. 10 convened in the city of Rosario, the home of a distinctly unusual fan club which, since the 1990s, has venerated the World Cup champion as a god.

The emotional get-together -- more than a few tears were shed -- has been an annual event in tribute to the man many consider the greatest footballer ever.

But this was the first to be held since last November 25, when Maradona, then aged just 60, was felled by a heart attack.

"I think this is the greatest Maradonian movement in the world," Alejandro Veron, one of its founders, told AFP. The "church" claims thousands of "faithful" in more than 50 countries

Between the tributes and the tears, fans told and retold favourite stories about the "Golden Boy" and frequently broke into the traditional chants of Argentine supporters.

Dalma and Gianinna Maradona are accused of harassing Matias Morla with whom they are embroiled in an inheritance dispute.
Lifestyle
3 months ago

Mediation Fails between Maradona And Ex On 'Missing' $6 mn

They also staged reconstitutions of some of Maradona's most famous goals.

Maradona died while recuperating in Buenos Aires from brain surgery last November for a subdural hematoma.

"Many people realized they loved Diego only after the 25th of November," said Veron.

"But they can get on the train too. There's room for everyone."

Veron recalled the day he met the superstar and told him about the "church" founded in his honour.

"He hugged me and said thank you," Veron said, his voice shaking with emotion.

"Diego IS football," he added, "he is our best ambassador in the world, a voice for those who have none."

The celebration in Rosario was one of several being held across Argentina on Saturday in Maradona's memory.

Football matches were organized in his honour, with a special homage being paid at the 10th minute of each professional match.

The main event is to be an afternoon match at the Buenos Aires stadium now bearing his name, home to the Argentinos Juniors, Maradona's first club.

Some of the stars from Argentina's World Cup-winning championship teams of 1978 and 1986 -- Maradona played on the latter -- are slated to attend.

Kenya's football darling Victor Wanyama has opened up after he welcomed his firstborn son with actress Serah Teshna.
Lifestyle
1 month ago

The viral clip of the baby bump shoot was done in Toronto when Serah was in her second trimester. But the baby was born in Nairobi a little over a ...
Exclusives
1 month ago