DJ Mo: Our baby died in the stomach due to high BP (Video)

• "Getting pregnant and giving birth is a favour from God. You cannot predict what can happen. It was shaky for us." - DJ Mo 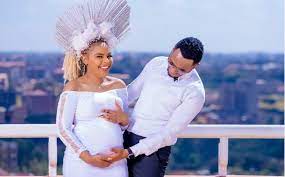 DJ Mo, husband to 'Mateke' hitmaker Size 8 has revealed their baby died in the tummy, hence she had to undergo an operation to remove the remains.

Size 8 lost her pregnancy a few weeks ago due to extremely high blood pressure throughout the pregnancy.

Speaking exclusively to Mpasho, Mo shared, "She was five months pregnant when we announced the news. Whenever she gets pregnant she usually gets high blood pressure so for the five months, it wasn't easy.

The pressure became too much and the baby died and we had to have an operation the next day otherwise we could have lost both of them.

People thought we terminated the pregnancy but she died in the stomach because of high blood pressure."

Msupa S has a child from a previous relationship, it is not clear whether he travelled with the child or whether she left him behind.
Entertainment
1 month ago

Asked how they are coping after the loss, Mo shared, "When you believe God in everything it becomes easier.

My inbox is full of stories of people who have lost up to 9 kids, so these things are normal. Getting pregnant and giving birth is a favour from God. You cannot predict what can happen. It was shaky for us."

Listen to the entire interview below.