Piece by: KNA by Deborah Bochere

• In the note, George narrated that he was compelled to take the ugly step after he realized that his wife had infected him with HIV/AIDS and could not stand the shame of living with the deadly virus. 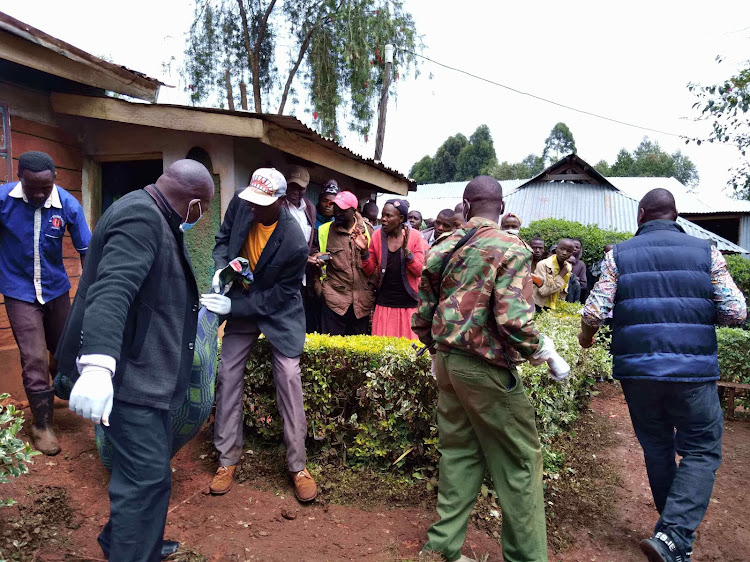 Police carry away the bodies of George and his wife to Nyamira County Referral Hospital mortuary.
Image: DEBORAH BOCHERE

Police in Nyamira are investigating an incident where a man is suspected to have murdered his wife and later committed suicide in Nyabomite village, Bogichora location in Nyamira County.

George Asiba is alleged to have killed his wife Mary Asiba on Tuesday night over what he termed as infidelity by his wife.

George, an evangelist, wrote in what is believed to be a suicide note he left behind that his wife Mary was engaging in an extramarital affair with a local politician, eyeing the MCA seat in Bogichora ward.

In the note, George narrated that he was compelled to take the ugly step after he realized that his wife had infected him with HIV/AIDS and could not stand the shame of living with the deadly virus.

In their house, where the incident happened, broken utensils and overturned chairs and tables scattered all over the two bed-roomed house, indicating clearly that a ferocious fight must have ensued between the couple before their deaths. 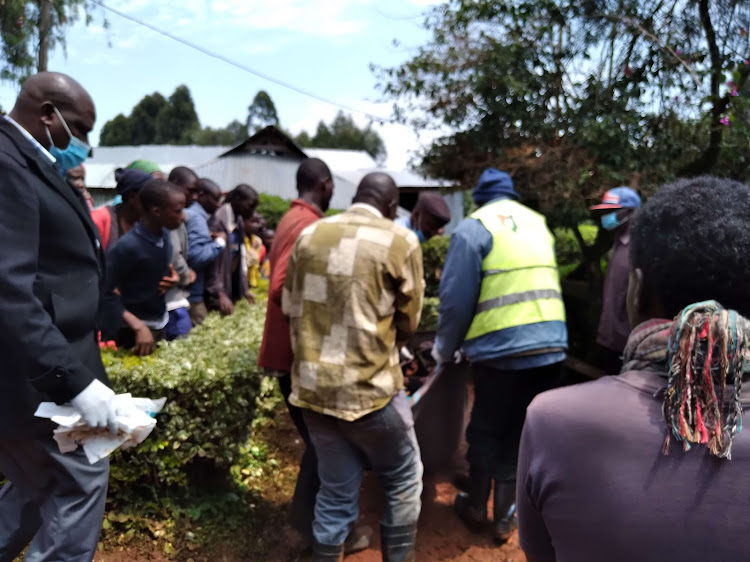 Police carry away the bodies of George and his wife to Nyamira County Referral Hospital mortuary.
Image: DEBORAH BOCHERE

The suspected suicide note lay on the table in the sitting room.

Mary’s lifeless body was lying on the bed while Asiba's body dangled from the rafters of his permanent house with a mosquito net strip around his neck.

According to area chief, Mr Peter Ndirangu, the couple has never reported to him any marital issues before and was shocked with the horrifying news of their death.

"I have known George and Mary for the longest time because they are my village mates and the duo have never shown any sign of misunderstanding in their marriage," he said.

He commented that he was utterly shocked that the couple's lives ended in such an ugly manner.

"We have recovered what we believe is a suicide note drafted by the husband and police are going to establish whether it originated from the deceased man," said Ndirangu.

He however appealed to residents to always speak out their predicaments to counsellors to avoid such scenarios.

"No house has peace and tranquillity all the time and whenever there is domestic row, people should speak out to be helped in good time to avoid such incidents," he said.

A resident, Moraa Nyauma said that the couple has been evangelizing through praise songs in their local Nyamira central PAG Church.

She said that she has never heard them quarrel or even overhear it from their close friends and was shocked to learn that they have been having serious marital squabbles but suffering silently.

Disturbing the dead! Body exhumed from school lies in morgue for seven months

He maintained that they gave the deceased a befitting sendoff according to a will he wrote to be buried next to the classroom of Koroto day secondary ...
Crime
4 days ago