The wrong injection led to my disability -Tahidi High's Kellen 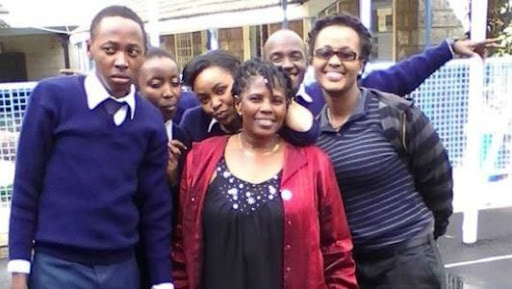 Joyce Wanjiku, known to many as ‘Kellen’, is an actress who appeared on the TV series Tahidi High.

At the age of five, she contracted measles and was taken to hospital for treatment but was administered a wrong injection, which led to her current condition.

The wrong injection administered to her when she was five, caused her leg to swell. Her parents assumed it was a minor issue that would finally heal.

However, it did not and her leg got shorter.

With her mother, she was able to find help from Dagoretti Children’s Home.

They helped her access Mater Hospital, where she was told she could not walk again without the help of a crutch.

This condition worsened the relationship between her parents and herself.

“My mum refused to take me school saying, 'Ata ukipelekwa shule, what can you do?' She later divorced my dad,” Kellen said.

This mother-daughter conflict escalated to the point they never spoke to each other until the mother died.

She said she was locked out of film auditions several times because of her condition.

Years ago, when she was selling sweets at the famous GPO stage in town, she met a woman who asked her about her Swahili accent.

She met Naomi Kamau of 'Machachari', who came with another woman, a poet, and they became friends.

She had just met her destiny reliever. The woman she spoke to linked her to Catherine Nguku, the former Tahidi High director.

Afterwards, she lost contact with them for five years but later met Naomi and was asked to report to Kenya National Theatre.

“I went back to Loitoktok for five years but when I came back, I met Naomi, Catherine’s friend, who asked me to report to KNT the following day. I was the first one to reach KNT. In fact, they found me there,” she said.

It is now 13 years since she started acting, and she says she enjoys the profession.

Apart from acting, Kellen also does hairdressing and doll making.

Her fellow cast members had difficulties interacting with her the first few days, but with time, she became one of them and is enjoying her career.

Mrs Ngatia - Omosh does not own two plots of land as claimed during one of their interviews.
Entertainment
1 month ago