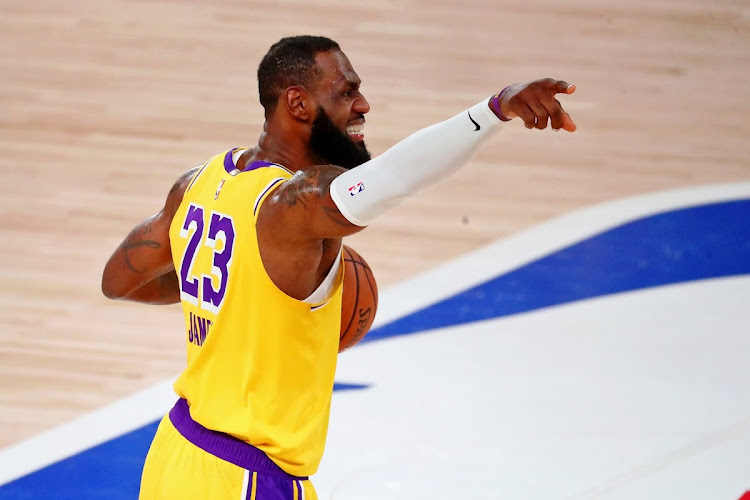 LA Lakers forward LeBron James (23) holds the ball as he gestures to his team in recent action
Image: THE STAR

LeBron James confirmed Tuesday he has been vaccinated against Covid-19 but said it was "not my job" to convince hesitant NBA players to follow suit.

The Los Angeles Lakers superstar had previously declined to say whether he had been vaccinated, stressing that any decision would be a "private" matter for him and his family.

However he told reporters on Tuesday he had been vaccinated, part of a Lakers drive to ensure that 100 per cent of the team's squad and staff had taken the vaccine.

"At the end of the day you're always trying to figure out ways that you can be available and protect one another and put yourself in the best possible chance where you are available to your team-mates, available to do what we need to do on the floor," James said.

"The ultimate goal is to win a championship and it starts with being healthy which is the number one thing."

Around 90 per cent of players in the NBA are believed to have been vaccinated as the new season approaches.

However, there remains a significant number who have either said they will not take the vaccine or have refused to confirm their status.

Lofty Matambo, the NTV anchor is in a spot of bother at the moment after getting his Covid-19 jab.The man revealed this information on his Twitter ...
Entertainment
2 months ago

Beal on Tuesday walked back his earlier comments, saying he was "still considering getting the vaccine."

"I'm not sitting up here advocating that you shouldn't get the vaccine," Beal said at Washington's media day.

"I'm not sitting here saying I won't get it."

The NBA has pushed for mandatory vaccinations of players but has reportedly run into opposition from the National Basketball Players Association, the players' union.

Unvaccinated players in certain markets -- notably San Francisco and New York -- will be forced to miss their team's home games because they fall foul of local laws requiring all home team staff to be vaccinated.

Other influential voices meanwhile have said the NBA should have launched its own vaccination mandate.

"The NBA should insist that all players and staff are vaccinated or remove them from the team," retired NBA superstar Kareem Abdul-Jabbar said in Rolling Stone magazine.

"There is no room for players who are willing to risk the health and lives of their teammates, the staff and the fans simply because they are unable to grasp the seriousness of the situation or do the necessary research," the NBA Hall of Famer said.

"My mom was very scared!" Winnie Okoth reveals on her weightlifting journey

Famous Kenyan weightlifter, Winnie Okoth recently spoke to Wabosha Maxine on her weight-lifting journey.But what many might not know about her is
Entertainment
1 month ago

Another Lakers icon, James, said Tuesday he had initially been sceptical of the vaccination program before deciding it was in the best interest of himself and his family.

"When it comes to me I can speak for myself," James said.

"I know that I was very skeptical about it all but after doing my own research I felt like it was best suited for me and my family and my friends. That's why I decided to do it."

However, when pressed Tuesday over whether he could play a greater role in persuading individuals over the vaccine, James said it was not his place to do so.

"I don't feel like for me personally I should get involved in what people do for their bodies and their livelihoods. It would be like me talking about whether somebody should take this job or not. You have to do what's best for you and your family.

"I know what I did for me and my family. But as far as speaking for everybody and their individualities and what they want to do...that's not my job."

Here are 10 of the most outrageous and nefarious frauds of the last few months.
Lifestyle
1 month ago