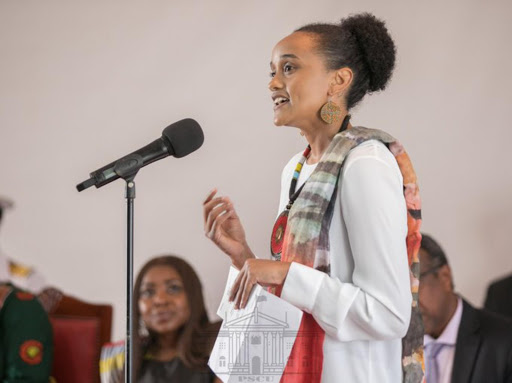 The news that Ngina Kenyatta has welcomed her first child has come as a surprise to many.

The highly guarded secret was revealed on Thursday night when Ngina was spotted at a City Hospital where she had gone to give birth.

As President Uhuru Kenyatta's family celebrates the addition in their family, there are men who have undergone what is commonly referred to as; 'character development' in the Kenyan dictionary.

Here are known men you had expressed interest in courting Ngina Kenyatta;

In 2017, a Facebook user named Patooh Mbuguah Gichini expressed his love for president Uhuru, and his daughter Ngina.

"I like your daughter Ngina. Please make me your son. Our enemies always ask, "unatetea Uhuru Kwani ni babako?" I want to be responding strongly 'Yes', dear father-in-law," the man wrote in a post.

The son of a sugarcane cutter from Vihiga County was an admirer of Ngina Kenyatta and had written a public love letter to her months ago.

On hearing the news of the newborn baby, Shem expressed disappointment but promised not to give up on his course.

In 2019, a 28-year old Chinese photographer expressed his admiration for the president's daughter.

"My mum also continuously asks when I’m going to get married. I just got overwhelmed and made the decision to tell people I’m going to marry Ngina,” Liu told the Nairobian.

In 2016, a youthful man from Tana River County asked President Uhuru to grant him his daughter for marriage.

In a meeting attended by the head of state in State House Mombasa, the man decided to shoot his shot.

All we know about President Uhuru Kenyatta's grandchildren

This week President Uhuru Kenyatta will become a grandfather again. His only daughter Ngina Kenyatta was at a city hospital giving birth yesterday ...
Entertainment
4 weeks ago