I inherited the spirit of circumcision - Bukusu man claims

Piece by: KNA by Lydia Wanaswa 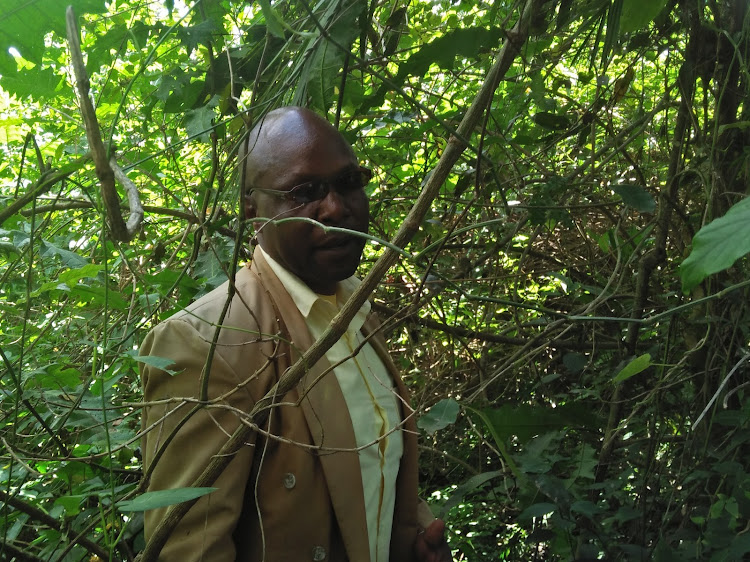 Kenya News Agency visited a renowned circumciser (Omukhebi) Josephat Musungu Makoye, a resident of Webuye to get some more insights.

After the initial greetings, he took us back to how he got into the circumcision business.

He narrated that he inherited the spirit of circumcision from his uncles of the Bakhoma clan thus confirming that not every Tom, Dick and Harry can become a circumciser.

“I fell sick when still young and developed some mysterious wounds on my body that would not heal despite treatment in various hospitals,” he said.

“Then one even year during the circumcision month, I followed to see what was happening, I fainted on the Stabicha, a special spot where the soil is applied to those awaiting to undergo the cut,” he added.

“I was immediately handed Lukembe, a special knife used for circumcision and Nyuli, a metal made by blacksmiths that are believed to calm down the spirits and immediately I got healed,” he said.

It then dawned on me then that I possessed the spirit of circumcision.

Musungu who is also a pastor received prayers to liberate him from the spirit but all this was in vain because it is in their bloodline.

“Two years later, I responded to the calling and began serving my purpose," he narrated.

"A pastor told me if I circumcised a person then blow a whistle, it becomes final and if I lay my hands on the sick, they get healed, so I do both," Musungu affirmed.

He explained further that during the circumcision period, whenever he falls asleep, he dreams about the boy who is about to be circumcised and foresees what will happen to him.

"The moment the boy steps into the stabicha and a special soil is applied before he undergoes the circumcision, my body trembles, and my heart beats faster.

I begin uttering strange words when he steps out of the stabicha as the crowd starts singing sioyayo, a song sang during circumcision and become possessed by a spirit and behave like a mad person the moment I cut off the foreskin I come back to my senses," said Musungu.

However, Musungu expounded that there were ladies who have the spirit and they get possessed on hearing the sioyayo.

This makes them run tirelessly like mad people to where the singing crowd is regardless of the distance and unless they are given lukembe by omukhebi to calm down the spirits, they might never stop running and causing a disturbance during the ceremony.

The application of soil on their body signifies they are dressed in attire which they will never put on.

The boys apply the soil on their body leaving a small area where the heart is located to ‘allow’ breathing, Musungu explained further.

After a long walk with Omukhebi Josephat to the stabicha, he explains more about the smearing process.

"After the smearing of the soil the boys are not supposed to use the path, they initially came along," Musungu pointed out.

During the odd years, when the ceremony doesn't take place, the stabicha remains dry like a normal ground contrary to even years where the stabicha automatically gets wet and bubbles in preparation for the period.

Nevertheless, the placing of grass on the head signifies the boy will be the head of his home.

The moment he dies, Lusuli, a stick that is put on top of a hut's roof which signifies the grass that was placed on his head during circumcision, is removed to show that the head of the house is no more.

It is believed when he dies, the cock is not supposed to crow. When it does, it should be killed with immediate effect, Musungu told KNA.

Musungu said that lukembe, the knife used for circumcision is made in Lirumbi, a shrine, and surprisingly, the person who makes it should be naked as a sign of blessing it.

Lukembe is carried facing upwards by omukhebi when he is going to perform the act, an implication of the connections with the spirits.

The handle of the knife used in the cut is from a special root of a Kamukimira tree.

The root usually cuts across the path; this implies that the knife will be used to circumcise many people.

When the omusinde, the boy who is to be circumcised, goes to stabicha, his mother remains seated on the floor stretching her legs.

It is believed that when she folds her legs, the omusinde screams calling the name of his mother which may lead to her death.

As a result of the impact, the driver, one Victor Prengei sustained serious injuries and was rushed to Moi Memorial Hospital for treatment while ...
Politics
1 month ago