• Mulamwah said Ezekiel Mutua promised him a job only for him to rely on an old video to deny me a job as the brand ambassador of KFCB. 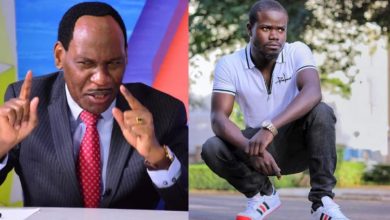 Comedian Mulamwah says he is happy that Ezekiel Mutua has been removed from KFCB.

The comedian says its high time those holding high offices respects their employers.

''First, we as creatives we are happy that our hustle has been respected. But for the best things he did for the industry, we are happy about it. Ezekiel made that position to be known that it really exists,'' he said.

Mulamwah said Ezekiel Mutua promised him a job only for him to rely on an old video to deny him a job as the brand ambassador of KFCB.

''I was trolled after him promising to give me a job, only for him to later brush me off on Twitter. There was a lot of hopes and I remember it was during those days when there was cessation of movement and I was in shags. I had to beg someone to help me get to Nairobi.

Only for him to go mute on me. Two to three months. After I tweeted about it, he came out and told me off. I had even told my dad about that job and there was a lot of hopes. What made me even angry is that there was nobody who was given that position,'' Mulamwah recounted.

''He relied on an old video of me saying that my content was dirty.''

Mulamwah, however, said that he has no beef with the former KFCB boss.

''I will only wish if he can do better in the next position he will get. Let him learn that not everything is solved via social media. Sometimes, call that person aside and talk to them without exposing them to the public.''

Christopher Wambua, the director of Public communication CAK now takes on the job as acting CEO of KFCB.

This comes after EACC launched investigations into irregular payments to Ezekiel Mutua.

Last night, Ezekiel had no idea he had been fired, he tweeted a denial asking people to ignore the "Malicious rumours."
Politics
1 month ago