'I begged Terence not to dump me during his ruracio with Milly Chebby,' - Baby mama

•I told him I couldn't accept that as I was too young to have a co-wife.- Terence Baby mama 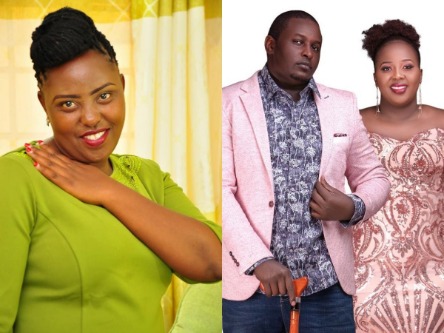 Eunice Wanene, ex-wife to comedian Terence Creative has revealed how she begged him not to leave her during his ruracio (traditional wedding).

This was after Terence decided to settle down with his current wife Milly Chebby.

According to Eunice, her pleas fell on deaf ears as she was still left.

Speaking exclusively to Mpasho, she said:

''I was 23 years old when one day Terence sat me down after serving him food and told me he was marrying another woman.

I told him I couldn't accept that as I was too young to have a co-wife.

My friends also discouraged me from accepting another woman into the relationship."

'It's been 9 years, let us be!' Milly Chebby pleads with Terence's ex-wife

I am tired of her witch hunting us,she said I recently called her ask her to give you evidence of me calling her and when was that.
Exclusives
1 year ago

Eunice added that on several occasions she had a hard time believing she had lost her man that's why she chose to beg him.

''On the day of Terence's ruracio, I was on my knees begging him not to leave me, my daughter was still young at the time.

I did not know I was embarrassing myself.

And that is how she (Milly) took over.

He left the house with nothing, not even his certificates. I did not throw the clothes away as I thought he would come back.''

'We were toxic to each other!' Terence's baby mama on why the marriage failed

No I never reported, we would handle it or look for a third party to help us sort it out.
Exclusives
1 year ago

Terence proposed to Milly four years ago in a heart-melting proposal on Kimathi Street.

Terrence went all out and caused a massive traffic snarl-up along Kimathi Street on that Sunday morning, as he went on one knee.

Milly's friends tricked her into leaving church early and as they were driving around town, they got pulled over by police.

Her friend who was behind the wheel told the men in blue that she didn't have her driver's license and that got them into trouble.

As they were trying to talk their way out of trouble, the FBI - the dance group - and some of her friends appeared from nowhere with more than 20 placards which were written: "Will you marry me?"

A surprised Chebbi said yes! And as they say, the rest is history.

Slain security consultant Peter Ndwiga was my husband, we even had a wedding after which we had a child together. - wife
Exclusives
1 year ago