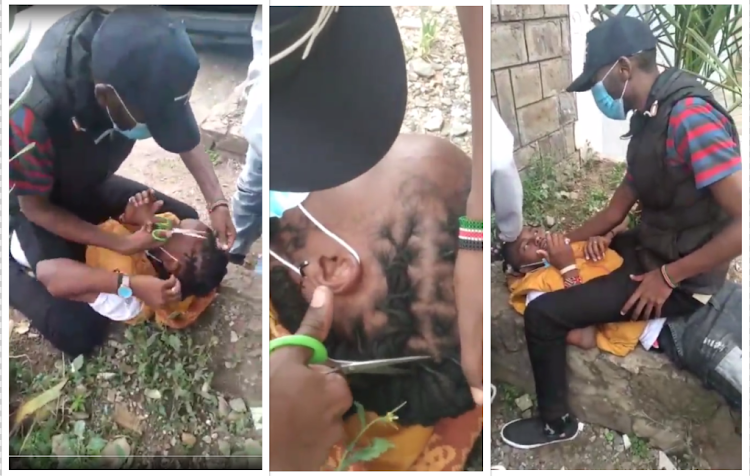 REPOSSESSED: City man cut off the locks that were fixed on the rastaman's head on loan

A city man based in Kayole has taken the law into his own hands and repossessed dreadlocks belonging to his girlfriend from a man who had not paid for them, months after they were fixed, fashioned and styled onto his head.

In a video that has since gone viral, the man corners the client who hasn't paid for the hairstyle for month, pins him down and proceeds to cut the locks.

Protesting the dreadlocked man tells the angry boyfriend, "I haven't refused to pay. I will pay you."

Despite his pleas, the city man continues to cut off the locks one by one using a pair of scissors.

"I have been sick, I have just recovered and returned," the dreadlocked fellow added.

A resident John Macharia said that the youths who are well known in the area had been harassing and robbing area residents for the last couple of ...
Lifestyle
1 year ago

A woman who is off-camera, whose locks are being recovered asked, "For 7 months Zawadi? Hiyo haiwezi."

The rastaman who lost his locks says he has not been working so he had no financial income to pay for the dredlocks.

The boyfriend and his bae filmed the assault that has since gone viral, if the rasta man in the video seeks justice against the assault, he actually has a case.

Watch the viral photo below.

• "This is a public interest matter. Accused persons have been charged with two counts of murder. One of a 26-year-old lady and the other of an ...
Politics
1 year ago