• There were no clear signs of cuts and bruises on his body, apart from the hand and leg that were already swollen even when he was alive.

• Msanii was found lying on his stomach, with his fists folded, an indication he might have struggled in defence. 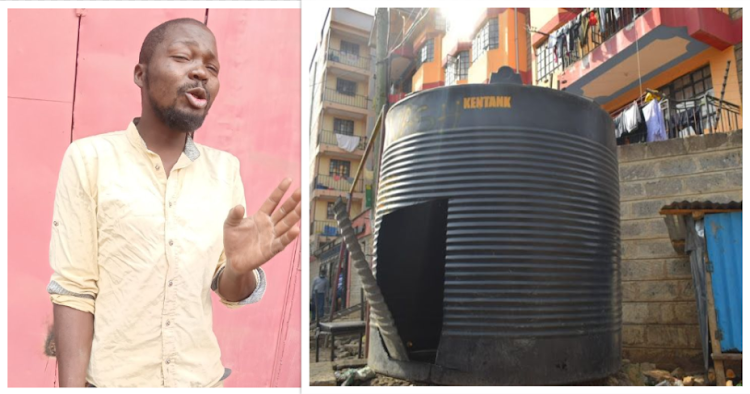 Edwin Wafula a.k.a Msanii and the water tank his body was discovered in.

34-year-old Edwin Wafula Okoth disappeared on Thursday evening and his body was later found dumped in a water tank.

His colleagues at the Sana Sana car wash in the South B area, Nairobi noted his absence.

Due to his recurrent disappearance and resurfacing, they did not take it seriously because they assumed he would come back, the same as what he was used to doing.

On Friday evening a group of his friends who work at the same place told the rest that Edwin, alias "Msanii" was in the hospital.

The same evening, Jared checked the water tank for water and he did not see anything at that point.

On Saturday the same people told the friends that he had to hang on a dust truck but he would later return.

After a long busy Saturday, Jared Gitonga checks the water tank to know the water levels in the evening.

At 7 pm, Jared found a dead body in the water tank and notified his friends.

Msanii was found lying on his stomach, with his fists folded, an indication he might have struggled in defence.

They called the police, they came checked the crime scene, arrested the men who stayed with him and later dispersed the onlooking crowd at 10 pm.

The police took the corpse to City Mortuary for investigation and identification by his family.

There were no clear signs of cuts and bruises on his body, apart from the hand and leg that were already swollen even when he was alive.

The Maasai man who guards the location said he did not see nor hear anything on the night when the body was found in the water tank.

He wanted every employee to feel they were like family to him.
Entertainment
4 months ago

On Sunday, the water tank where his body was found was torn apart and his body retrieved.

The tall, dark 5000 litres water tank, found close to a perimeter wall with a small top hole would not fit anyone trying to throw themselves in it.

The policemen around the crime scene together with his colleagues suspected that Msanii was murdered and later dumped in the tank at the wee hours of the night.

Months ago, the workers at the car wash had jointly set up a mabati structure just around the car wash where he stayed with a few of his other friends.

His colleagues could not clearly tell his origin but at one point he mentioned that his home was in Lugari.

He was described as straightforward, harmless and humble, they did not find a reason to dig deep and know about his family, they say.

They say he would spend all his time getting intoxicated, at the time he has no family, no wife or children that could be identified by his colleagues.

The cause of his death is yet to be discovered as those who were arrested will soon be taken in for questioning.

'I am scared of dying but...' Dr Wahura Kanyoros suicide note

What drove her to end her life? That's the question-consuming relatives, colleagues and friends.
Lifestyle
4 months ago