'I can't talk to a thief,' Mejja speaks after his song was pulled down

Mejja responds after song was pulled down from Youtube 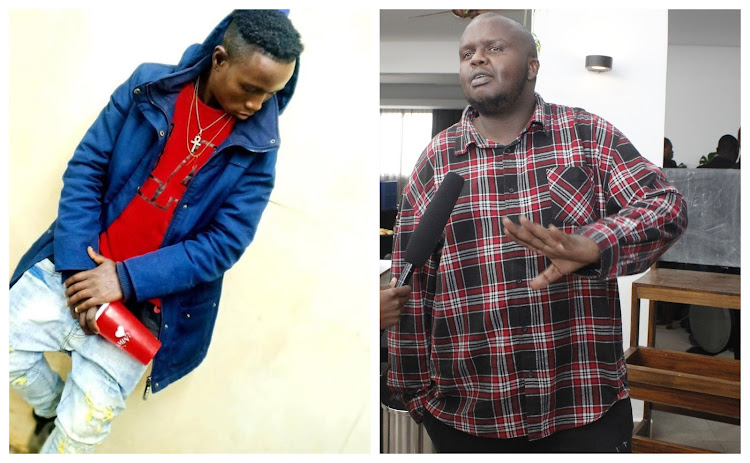 Gengetone artist Mejja has opened up on his music being pulled down from Youtube after copyright claims.

Speaking, exclusively to Mpasho, Mejjea aka Okwonko said that the move was meant to slow down his music career.

"I uploaded the music that striked mine, and as you can hear, they are different. I want this thing to stop, my psych is down right now.

On the fateful day, i was going for a video shoot but cancelled it. I thank those who supported me. I want to deal with this issue the legal way, the music will be back on Youtube," Mejja said.

After the music was pulled down, Mejja has not held any talks with Bouja Boy, who claimed to be the rightful owner of the beats in Tabia za Wakenya song.

"How can you talk with a thief? I can not talk to a thief, just wait and see. This guy knows that he is wrong, but he knows by stricking me on Youtube, it will slow down subscribers, views. This was just a dirty game on my business. And it really bored me. When i say i am dealing with it, i swear i will deal with it."

On Saturday, Thiery Majambere known by his stage name Bouja Boy that he reached out to Mejja for talks before taking legal action.

"I have no bile with Mejja. He was very rude to me. He told me, 'Kuna mahali ya Kureport' and I proceeded to provide proof to Youtube. I started processing the music 2 hours after the music was uploaded. I have no benefits by reporting him, but alinionyesha madharau," he said.

I called him once more, he was very rude to me. He told me, 'Kuna mahali ya Kureport'...
Exclusives
1 year ago