Turning in her grave! Murdered Ivy Wangechi's family lawyer explains how justice has been denied 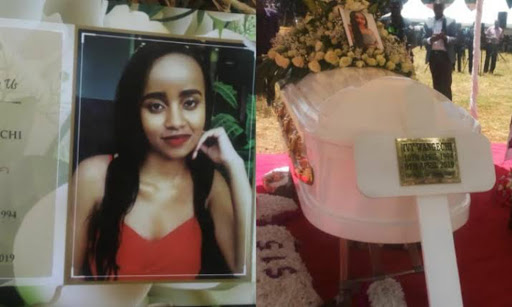 The family of Ivy Wangechi, a medical student at Moi University who was hacked to death by her boyfriend in April 2019 is crying for justice for their deceased daughter over delay in the case.

The family advocate Kiroko Ndegwa said the case concerning the death of their daughter has never kicked off despite the family attending court sessions every time the case is planned to be heard.

“It is sad that as we speak the hearing of this matter has not begun, the main challenge being delay by the defense not being prepared, the matter was to come up for hearing Thursday unfortunately for the fifth time, the defense council decided to withdraw from representing the accused person leading to further postponement,” Ndegwa lamented.

He reiterated that it is the third year since Ivy was killed, but up to now the prosecution has never opened the cases, not because of inability but we suspect it is due to well-calculated moves to frustrate this cause, he claimed.

“Today we had brought eight witnesses in a record time ready to begin the process, the other four times we have brought nothing short of 10 witnesses unfortunately the weaver here is on the side of the defense,” said the family advocate.

John Kingori, an Uncle to the deceased said they have been pursuing the case since it occurred which has become costly to the family who have to travel from different parts of the country.

“We have been here to attend courts over ten times and the hearing has not taken place. Some of us have come from Nyeri, Thika, Nairobi, and as far as the Coast and we are going through a lot,” he said

Ivy’s mother Winfred Waithera Kingori vowed to fight to the end to ensure her late daughter gets justice.

“Since 2019 I have always wished I was born in another country where there is justice and I want to inform you that what I have learned through this process that accused people in the cells have rights but people whose kin have been murdered no rights and that is why nobody cares what they going through,” Kingori claimed.

She says that whenever they travel to Eldoret Ivy’s relatives go into mourning as they are reminded of what their kin went through, yet they are turned away in court just because the prosecution has not secured a lawyer to enable the case to proceed and we wonder why we are not informed in advance so that we don’t waste our time and resources to travel.

“For how long is the agony going to continue, how many mothers are going to be stressed and frustrated? If this continues such matters may not be reported in the future when people realize they are not going to get justice,” she moaned.

“When the defense cannot appear for five times, where are the poor Kenyans supposed to seek justice? we spend over 100,000, I am going to fight for justice for as long as possible even if I die because of this case so be it."