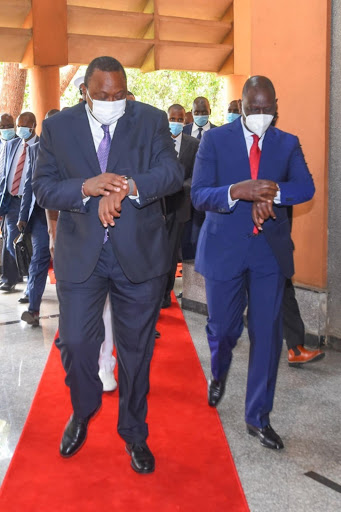 It has emerged that president Uhuru Keyatta was absent with an apology at June Ruto's wedding.

After the prayer breakfast event held at Parliament buildings, the head of state conveyed his congratulatory message to June through her father.

The president told Ruto to congratulate the newly weds on his behalf, promising to visit them after his tour to Kisumu.

However, many other politicians drove off to Ruto's home after the end of the prayer breakfast event.

The event was filled with pomp and colour as several VIPs were seen getting loose, dancing to Kalenjin traditional songs and famous Nigerian hits.

Dressed in a white gown and peach shoes, June Ruto was walked down the aisle by her parents on Thursday afternoon.

Peach and gold colours dominated the event, with the brides mother dressing in a peach dress with a touch of gold.