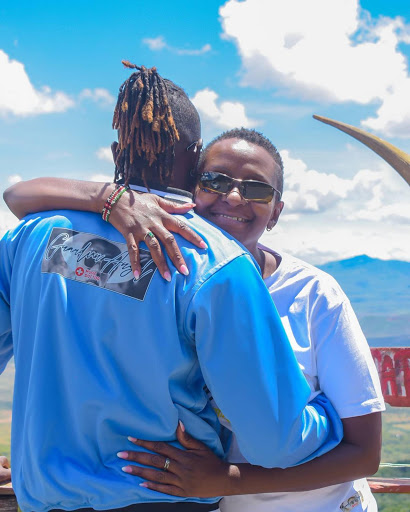 Esther Musila has narrated the events that led to her surprise engagement party on her birthday.

She was aware Guardian had plans for her birthday, but was not how big it was since her partner had complained of financial constraints.

In a long post on Instagram, Esther narrated the events that led to her surprise engagement party.

"As usual woke up did my morning exercises, had breakfast, and since I am working from home I have to manage my time we recorded our Zaidi Zaidi video and since I had been informed we had to go and do the signing for the record deal, I was even convinced to wear a dress(which I don't do anymore) for the photo sessions and thereafter he would take me out for dinner!" Esther narrated.

"I obliged and we set off for Karen. My G even in the car apologised that he was broke he wishes he could have done more, and since for me birthdays are not really a big deal, I told him not to worry I am OK as long as am healthy and God has brought me this far it didn't matter. So, we get to Karen, ushered into the studio and said we give them a few minutes as they set up"

"Then, someone called him outside of the room and he took quite sometime to return. Kidogo kidogo he stands at the door then he asks me to come. As I stand up to leave, someone starts playing the saxophone and that's when it hits me. I can't even move my feet and all of a sudden there are so many people around I had not seen when we arrived. So I am led through a path lined up with roses into a gazebo and there sits my cake. At this point am thinking, my G, here you got me! I shall deal with you when we are alone"

"So I am there cutting cake then because obviously I expect to feed him cake or vice versa, I turn to find him then I see him behind me on bended knee!! I quickly turn back because I don't think I've seen right 🤭. I turn back again and that's when it hits that he , is proposing🙊🙊. It took me a couple of minutes to take it in. I said no no meaning I can't believe my eyes!!! I cried, I cried 😢😢. This is one moment I will live to remember. Double blessings I must say."