Embarambamba must get up from the mud and think 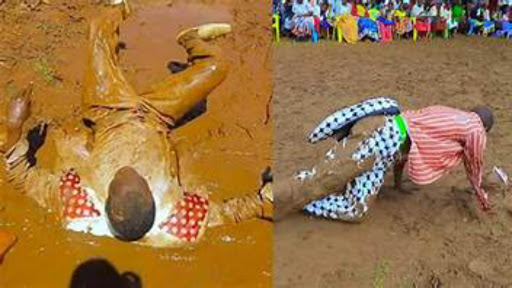 Kisii musician Embarambamba is well known for the acrobatics in his song, with only a few people getting his message.

But for how long will Kenyans cheer Embarambamba just because of his antics on muddy terrains?

According to Christopher Mosioma, his songs have a 'comedy inside gospel' approach. He said that poverty is the major reason for his antics, his goal being to make money to provide for his family.

Well, this genre of music may not really propel Embarambamba's music career to greater heights.

Other than the gymnastics played,  I have never heard the message in his songs. If he doesn't rethink his strategy, many Kenyans will just take him for a joke and use him in memes as it is right now.

In terms of getting collabos with other gospel musicians, Embarambamba needs to tone down his aggressiveness and give more energy to the music other than acrobatics.

Which established video director is ready to chase a musician who is running inside a forest thicket like Usain Bolt?

A section of Kenyans have expressed discomfort in his performances, specifically one that he was jumping onto animals.

The Kenya Film and Classifications CEO, Ezekiel Mutua also raised concern on Embarambamba's style, saying he has a great talent but needs help to grow.

“Embarambamba on the Trend on NTV, says his theatrics are because of poverty. He’s asking for help. Bro come, let’s talk. You don’t have to do this madness for likes on social media. Come let’s find a way out. You sound ok, but ur theatrics are embarrassing & must be moderated!” Mutua told Embarambamba.