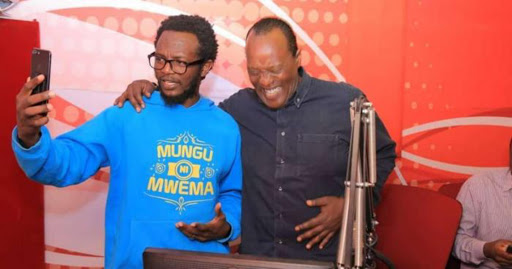 Herman Gakobo Kago, who is commonly known by his stage name Hamo will cease hosting the breakfast show on Hot 96 alongside Jeff Koinange.

The source further disclosed that Hamo has been facing disciplinary cases in the company.

It is speculated that his scandal with fellow comedian Jemutai, may have appeared to have sealed Hamo's fate, leading to his dismissal, however this is not confirmed as the reason.

The Hot 96 presenter was accused by Jemutai of being a deadbeat dad after she reached out to blogger Edgar Obare, and said that Hamo was not providing for their two kids.

She decried tough economic times, putting up her Facebook account for sale in order to get money to fend for her two babies.

Hamo dismissed Jemutai's claims, saying that he was providing for all his kids.

After an intervention by their Churchill show boss Daniel Ndambuki, the radio host committed that he will pay school fees for the children and provide their basic needs.

He further asked for a DNA test to be conducted on the boy and girl. Yesterday, Jemutai announced that the results were out, and there was a 99.9% match between the babies and professor Hamo.