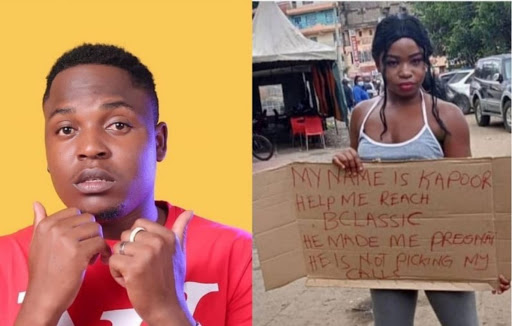 Musician B Classic has been accused of impregnating a video vixen and disappearing into thin air.

The vixen known by her stage name Purita Kapoor took to the street with a banner asking for help to reach the musician.

According to Kapoor, B Classic impregnated her and is currently not picking her calls.

"My name is Kapoor, help me reach B Classic. He made me pregnant, he is not picking my calls," read her banner.

Through an Instagram post, the vixen said that she is stressed as it has been 3 months with no food or any other support from the musician.

"I am so stressed, help me reach B Classic, amenipea ball and i cant find him. Its 3 months now, no food and support, all i see is him releasing videos za pesa mingi while am stressed with his baby," she wrote.

The Bongo musician is yet to respond to these accusations from Kapoor.

Jemutai accused her fellow comedian of neglecting her during first pregnancy and failure to provide for her two kids thereafter.

After the intervention of Churchill, the two agreed to settle their difference off social media.