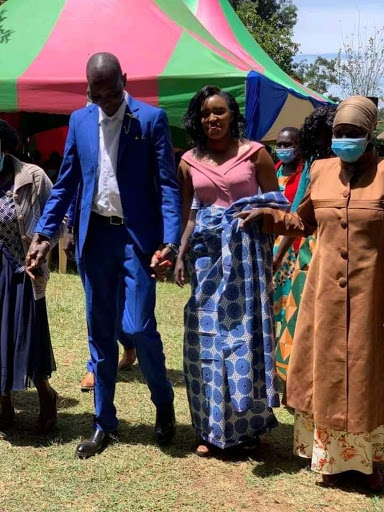 On Friday, marathoner Asbel Kiprop hosted an engagement party for his new bae whom he identified as Faith.

This comes after his wife, Sammary Cherotich moved on and got married to Kelvin Busienei.

The former 1,500m Olympic champion and his ex-wife, Cherotich went through a publicized fallout at about the time the athlete filmed himself making out with another woman inside a car.

Around the same time, Kiprop had been banned for four years after testing positive to Erythropoietin (EPO) in an out of competition test.

Speaking to sections of the press Cherotich said,

“Asbel is depressed as we speak and needs urgent counselling. Kenyans should stand with him the same way they celebrated his wins. I am not defending him because he is my husband but because I know he is a talented athlete,” Cherotich said in 2018.

But now all that is in the past, Asbel has moved on and he announced the good news to his fans saying,

"Today I'm officially engaged to Faith. I thank all who attended the function at Simat. Looking forward to the next chapter in life."

The party was starstudded with all the top athletes in attendance they include Benjamin Limo, Vivian Cheruiyot, Dennis Kimeto, Said Saif Shaheen, Geoffrey Mutai and Moses Tanui.

Check out photos from the engagement party.