Carabao Cup Finals on DStv: The first of a treble for Man City? 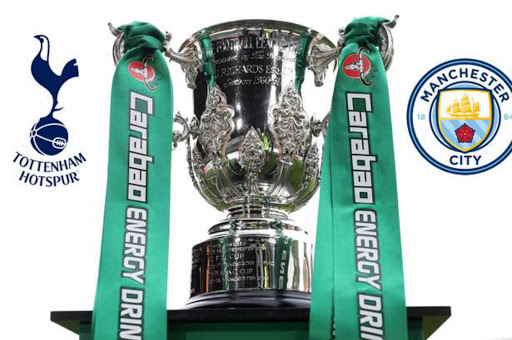 viewers on  can look forward to what could be the first step of a ‘treble’ from Manchester City, as they face Tottenham Hotspur in the final of the 2020-21  on Sunday 25 April at Wembley Stadium in London.

is your #HomeOfFootball and the ultimate destination for lovers of ‘The Beautiful Game’.

City find themselves looking to win three trophies this season: the ,  and . It could have been four, but they exited the  at the hands of Chelsea in last weekend’s semifinals.

Now they have the chance to win the  for a fourth successive season (and a fifth time from the last six campaigns), though manager Pep Guardiola comes into the match defending his team selection from the Wembley defeat to the Blues.

“When a team arrives in the final stages of all the competitions, when this team, wins four finals in a row in the Carabao Cup, you can't say that. Just say we lost the game,” said the Spaniard. “We don't get to the semifinals of the FA Cup, the final of the Carabao Cup four years in a row and the semi-finals of the Champions League when we do not pay attention to anything.”

Tottenham, meanwhile, are in need of a pick-me-up thanks to their flagging campaign under Jose Mourinho which sees them struggling to qualify for elite European competition next season. Appearing in this match will at least earn them passage into the new UEFA Europa Conference League, but that will be less important than the symbolism of claiming a piece of silverware for the first time since they last won this very competition in 2008.

“The selfishness is around, the individual interests are around, the agents are around, the connections between agents and press are around,” said Spurs boss Jose Mourinho, who has won this competition four times before – three across his two spells with Chelsea and once with Manchester United.

"And instead of developing a feeling of a team, empathy, 'I do for you, you do for me', 'I win if I play 90 minutes, I win if I am in the stands'. This is something that you need time to develop in a group. Nowadays you need time because society and the psychological profile of younger people is not an easy one.”

Kevin De Bruyne – Man City’s Belgian playmaker is a man for the big occasion and will be aiming to stamp his authority on this clash in Wembley. If De Bruyne can get on the ball and orchestrate the Citizens’ attack with freedom, then a fourth straight Carabao Cup is surely theirs for the taking.

Harry Kane – If Tottenham are to have any realistic chance of upsetting Man City in this final, then they will need their big players to come to the party, especially captain Harry Kane. The England striker will be desperate to win a first piece of major silverware with his beloved Spurs.

In head-to-head stats, Man City and Tottenham have met in 163 matches across all competitions since their first clash back in 1909. The Citizens have claimed 64 wins compared to 63 for Spurs, while 36 games have been drawn.

The teams have met twice in the Premier League this season, with Tottenham winning 2-0 at home in November 2020 before City claimed revenge with a 3-0 triumph in the return game in February 2021. The clubs’ last meeting in the Carabao Cup was in December 2007, with Spurs winning 2-0 away from home in the fifth round, en-route to winning the competition that season.

Pep Guardiola v Jose Mourinho – Theses managers boast seven Carabao Cup titles between them, with Guardiola hoping to join Mourinho, Sir Alex Ferguson and Brian Clough as a four-time champion of the EFL Cup. However, the Spaniard would hold the unique feat of winning his four titles in succession.

Joao Cancelo v Son Heung-min – The versatile Portuguese defender has been a key man for City this season, using his flawless technique and tactical intelligence to give his side an edge. Yet he’ll be tested by the clever running and raw determination of Spurs attacker Son, who will look to fire his team to glory.

Gabriel Jesus v Eric Dier – Whether City opt for a traditional centre-forward in their line-up remains to be seen, but assuming Gabriel Jesus gets time on the field he will be confident of getting the better of Eric Dier, with the English centre-back set to have a busy afternoon against the free-flowing attack of Spurs’ opponents.

No rival can compete with  coverage. Our viewers on  can see all their favourite stars from the African continent dominating  pitches across England.

Don’t miss the 2020-21 football season on  on DStv and GOtv. Visit m to subscribe or upgrade, and join in on the excitement. And while you’re on the move, you can stream matches on the DStv App.

DStv customers can purchase the DStv decoder for only Sh. 3999 from all MultiChoice branches, dealers, supermarkets and retailers countrywide. Dial *423# now to buy, pay, reconnect or clear errors. To manage your account, download the MyDStv App. For more information about other content, products and services, from DStv visit . Customers can also visit the official DStv Kenya social media pages