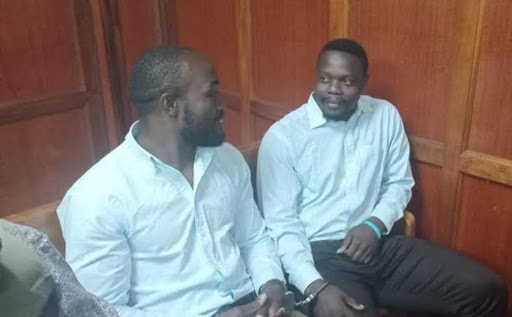 Former rugby player Alex Olaba Mahaga was on Thursday night arrested over claims of attempting to murder a witness in a rape case he is facing.

Olaba and fellow former player Frank Wanyama are facing gang rape charges before a Milimani court and are both out on a Sh300,000 cash bail.

Police said Olaba was planning to kill a key witness in the case in efforts to defeat justice.

He was arrested in Nairobi West where he was meeting an undercover detective planning the said murder of the witness in the case.

Police said they recovered two mobile phones from Olaba which are undergoing forensic analysis to establish if there were more players in the crime.

Olaba had apparently approached another party seeking ways of eliminating the witness in the case before police were informed.

The officers then sent undercover officers who posed as possible executors of his mission before they pounced on him.

After his arrest, Olaba told police he had been possessed by satanic spirits.

He was on Friday expected in court to face charges of attempted murder and conspiracy to defeat justice.

Olaba and Wanyama were released on a cash bail of Sh300,000 by Milimani Law Court magistrate Zainab Abdul after they pleaded not guilty to charges of gang rape and committing an indecent act.

This was after the High Court ordered a retrial.

The High Court quashed their conviction and 15-years imprisonment after it ruled that there was no evidence that one of the key witnesses in the case was sworn in before taking to the stand.

It is a requirement that one must take oath before testifying.

The two are alleged to have committed the offence on February 11, 2018, at Seefa Apartment in Highrise estate in Nairobi County.

The two were warned not to interfere with witnesses lined up in the case lest it cancels the cash bail.

In August 2020, Milimani Chief Magistrate Martha Mutuku ruled that Wanyama and Olaba be jailed for 15 years each.

“The complainant was traumatised hence a deterrent sentence is necessary,” she ruled.

The verdict was read in-camera, meaning only the accuser and respondents were present.

The rugby duo played for Kenya Harlequins and the national rugby 7s team.

They were charged with gang-raping a woman named WA on February 10 last year at an apartment in Highrise, Nairobi County.

The events that have now culminated in the sentencing started at a party in Spring Valley.

The artiste said one player lured her to his house after they left the party.

According to her, the two raped her in turns, as she fell in and out of consciousness.

In a series of posts on social media, she narrated how she had been raped on her birthday.

WA claimed she became pregnant from the ordeal.

She claimed to have gone to Nairobi South Hospital for a medical test.

Olaba and Wanyama maintained the sexual escapade was mutually agreed upon.