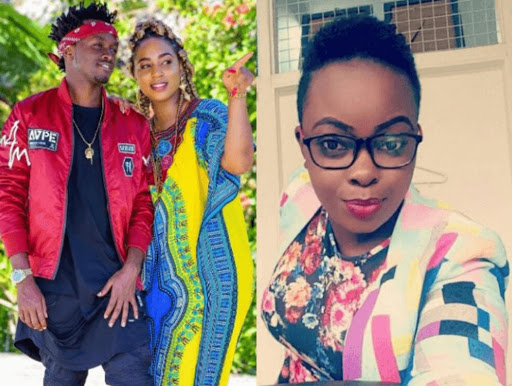 The mother of Bahati's firstborn child Yvette Leonida Obura has spoken out about labels that people have people have given her that are not very pleasing.

"It is not a good feeling. The best way to put it is like 'The mother of Bahati's child'. Not baby mama, when I hear the word baby mama it has a bad connotation associated with drama."

"I meet people in town and they are like, ndio ule baby mama wa Bahati, I'm like, 'my God, I have my own name'. But anyway I'm now used to it. I can't change that."

Asked how she relates with Bahati's wife of 5 years, Yvette explained,

"Diana Marua, clearly she is the wife, and if you are going to describe her, you will call her Bibi ya Bahati. And that is it. We don't compete over anything at any point. She is the wife, I'm the mother of Mueni."

"We do talk. the respect for each other was there from the word go. Initially, we never used to talk. it reached a point where during the holidays most of the time, Mueni would be at her place, see we have to communicate."

The misconception most people have is that all baby mamas are dramatic. Yvette rubbished that claim saying,

"If I was dramatic, huku inje ingekua inajulikana that I'm all over that nimemletea drama. that is not me."