'My husband isn't complaining,' Vera Sidika responds after she was criticised for posing semi-naked 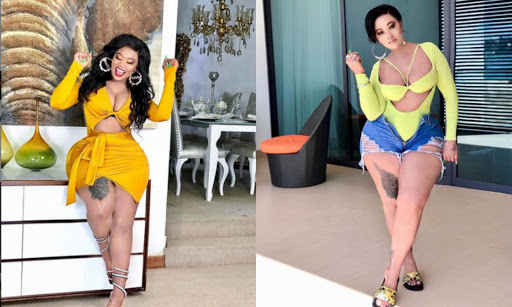 Bootylicious socialite Vera Sidika has told off trolls who' ve criticised her dress code. Vera who recently got 'married' to her current lover Brown Mauzo, has been sharing salacious pics leaving little to the imagination.

Responding to critics expecting her to change her dress code, she posted,

'....and Social media in-laws🙆‍♀️. Ati oh you’re a married woman now you shouldn’t dress like that. Oh you’re too old for this 😂🤣 who said married women can’t be sexy?? Am I to look like a potato sack now that I’m married? 😂😩 my husband isn’t complaining. So, Who are you to complain? Stop Taking panadol for my headache 😂😂😂 I will post sexy even when I’m 90 and toothless 🤷‍♀️'

prodigl2 You are already toothless😂!!umesahau pia meno ni ya plastic😂😂

dianadavine.m The marriage part is what we don’t believe the dressing is as per usual