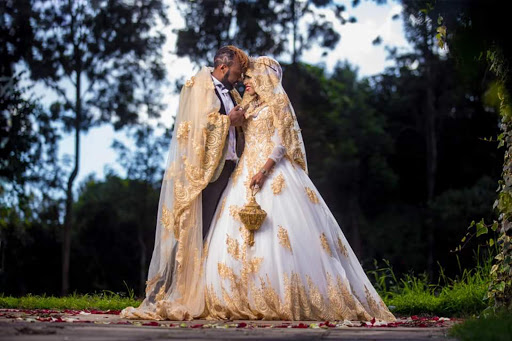 There is love in the era of COVID-19. Churchill comedian Nasra Yusuf walked down to aisle in the presence God, family and friends and exchanged vows with the fiance, Rydah.

We are however sceptical because only Rydah has posted the photos and alluded to the fact that it could be a promo shot for a popular bridal gown designer.

Nasra hasn't posted anything on her social media.

However, in a past interview with Churchill Show, Nasra revealed that she escaped an arranged marriage to an old man.

"My father had decided to marry me off so he brought an elderly man. I could see white hair on his head. My mother asked me to persevere arguing that the elderly man had only a few years to live.

"I was to be married off but I declined. I insisted that I wanted to pursue my own dreams to be successful. It does not mean that marriage is the only successful avenue."

Check out the photos from the grand ceremony.