Wololo! Leaked screenshots of Mustafa begging Noti Flow to give him another chance emerge 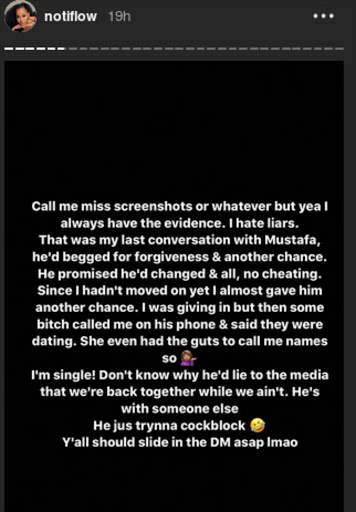 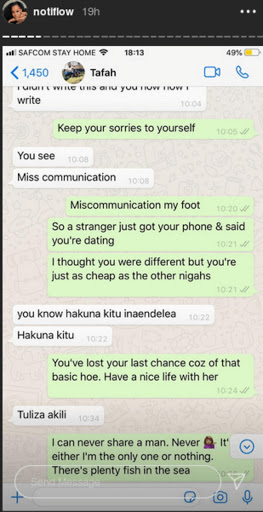 Socialite Noti Flow has exposed her ex-lover and fellow rapper Colonel Mustafa for begging her for a second chance.

Mustafa and Noti Flow dated for quite a while although their relationship was on and off and last year they called it quits.

The controversial rapper has leaked a screenshot of their conversation with Mustafa, begging her for a second chance.

She blasted the once-upon-a-time superstar, telling him off.

Call me miss screenshots or whatever but yeah I always have evidence. I hate liars. That was my last conversation with Mustafa. He'd begged for forgiveness and another chance. He promised he'd change and no cheating. Since I hadn't moved on yet I almost gave him another chance. I was giving in but then some b**ch called me using his phone and said they were dating. She even had the guts to call me names. I'm single/ Don't know why he'd lie to the media that we're back together while we ain't. He's with someone else. He just trynna cockblock.' she posted on her Insta stories.

This comes barely a week after Noti Flow shared screenshots of her WhatsApp chats with Ochunglo Family's Benzema.