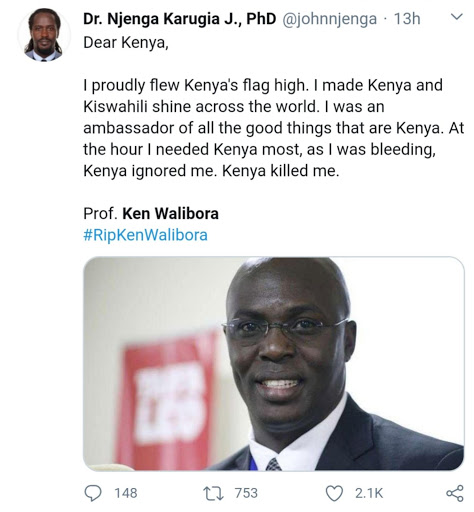 Professor Ken Walibora's body was not identified for days after he died at Kenyatta National Hospital.

On Good Friday, it is reported that Walibora was attacked by unknown assailants who were wielding sharp knives.

As he was fleeing the gang he was knocked down by a Double M matatu along Landhies Road.

He spent the better part of the day in the hospital where he was unattended to for 12 hours and later passed on after midnight.

Five days later was when friends and relatives identified his body.

His demise is somewhat similar to a character in his popular novel, Siku Njema.

In the book, Walibora wrote,

"Hakujulikana na wengi kuwa alikuwa Juma Mukosi,msomi wa kutajika. (It wasn't known that the body was that of Juma Mukosi, the reknown scholar.)"

Walibora's memorial sevice was held on Saturday via the Zoom App.

KOT had a lot to say about his preventable death.

@SamMogul: How can we lose a distinguished professor to bandits, reckless drivers and a failed health system. Siku njema haitafika.

@zaidrehema: Indeed so Sad!!! we failed him, he did not deserve to die in that manner. May his soul rest in peace.

@Mustafa_Y_Ali: Ken was a dear friend. I worked with him in the 1990’s at KBC. Used to see him occasionally at NMG during the morning Standing on Guard Program. Spoke to him a number of times on matters Swahili. We failed him. Health system in @254 failed him. We need answers.

That sums up the society and country we have today in Kenya.

It's sickening to the core.

Such a good man lost his life just like that due to the callousness of a failed system that doesn't care about anyone or anything.