I did not fake buying Tanasha a car! Diamond finally speaks out (Video) 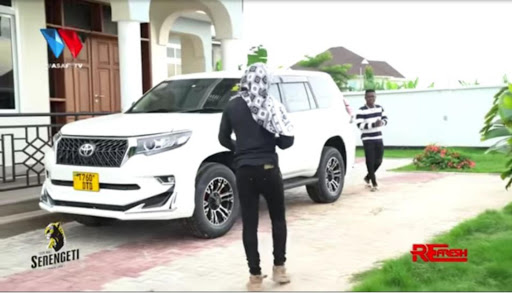 Diamond  Platnumz has finally spoken out on the ongoing debate of whether his birthday gift for Tanasha was for show or not.

Initial reports indicated that the car was never owned by Tanasha.

Later gossip pundits claimed that Mama Diamond had repossessed the car and was using it.

Now, Mbosso was spotted with a similar ride and tongues were wagging claiming that Mbosso inheritated the white Toyota.

Mbosso cleared his name saying he bought his own car and even shared the log book with his fans.

To further clarify this, Diamond has taken a video showing all three cars saying that no one has taken Tanasha's birthday gift.

He showed, Mbosso's car, Tanasha's and a short glimpse of the mother's car.

In the video, Diamond said,

He then moved to another white Toyota car and showed a different number plate.

He captioned the video, "We don't fake our lifestyle."

In the video he is heard saying off camera.

Check out the video .

Diamond also got his fans talking when he compared his ex, Tanasha to video vixen Malaika.

He posted two shoes on his Instagram and captioned it,

Fans started compairing Tanasha to Malaika with many urging him to try out Jeje - meaning a new relationship.

The video vixen Malaika is rumoured to have been the reason Tanasha dumped Diamond and jetted back to Nairobi.